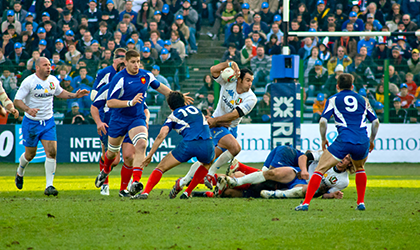 A rating system is used to account for home advantage and to determine the team most likely to win each game. The International Rugby Board, now called World Rugby, created the system, and it adjusts the ratings of each team after each match so as to optimize future predictive accuracy.

For a given game, the probability that the home team will win is estimated to be 0.50 plus (home team’s rating +3, less the visiting team’s rating) /20. Suppose that Ireland, with a rating of 85, plays host to France, which has a rating of 87. Ireland would gain three rating points for playing at home and thus would have a higher adjusted rating by a margin of 88-87, establishing Ireland as the ratings-based favourite. Ireland would be predicted to win with a probability of 0.5 + (85 + 3 - 87) / 20 or 0.55.

The three-point home advantage accounts for the physical advantage due to the visitors’ possibly experiencing travel fatigue, the psychological advantage of having the vociferous support of the home fans, and the tactical advantage of familiarity with the venue, which could aid kicking accuracy and enable more consistent performance. If both teams have the same rating, the home team is therefore expected to win 0.50 + 3/20, or 65% of the games.

For each rating point a team gains or loses, the probability of winning increases or decreases by 1/20 or 5%. After each game, ratings are adjusted depending on game importance and the difference between the actual result (on a 0-1 basis) and the predicted probability. The team that did better than expected gains rating points and the team that performed worse than expected loses the same number of rating points, forming a point-exchange system.

We begin by testing this use of three rating points for home advantage. We ask: does the average home nation actually win about 65% of Six Nations games?

In each Six Nations competition, 15 games are played. Each team plays the other five opponents, but obviously not with the same number of home and away games. The following year, the home/away schedule flips. Therefore, over a two-year period, a balanced double round-robin occurs for each team, in which each of the five opponents is played once at home and once away.

Home team advantage is much better behaved when pairs of years are combined. Over several pairs, we expect the average home-team rating to approach the average visitor rating, thus creating a meaningful test of the three-point home advantage. Over all eight years, with ties omitted, the home nation won very close to the expected 65% figure (winning 64.1%). Our conclusion is therefore that the three-point home advantage correction is indeed quite accurate.

We now turn our attention to the accuracy of predictions made by World Rugby’s ratings system. Recall that the system allows us to calculate a win probability for each team in a two-team match up, with the favourite being the team with the highest win probability.

Table 2 reports how often the favourite won each Six Nations game over eight years of competitions. Accuracy rates (in the “Favourite won” column) are calculated for non-tied games only, as was done for home advantage.

Successive years have exhibited as much as a 43.8-point differential (2013-2014) in accuracy rates, but the two-year combined data are much better behaved. Notice that the last three two-year combinations have shown monotonically increasing predictive accuracy, from 65.5% to 79.3% to 83.3%. In fact, 2017 (with 86.7% accuracy) is tied with 2014 for most predictable year, while 2018 (with 80.0% accuracy) is tied for third most predictable year.

Over eight years and 120 games, 87 matches were won by the favourite, three were tied, and 30 could be considered “upset” games – that is, the favourite lost. But which nations have been involved in these upsets?

The left portion of Table 3 summarizes head-to-head records of actual game outcomes, rather than ratings-based predictions. In Table 3, England, Wales and Ireland had the most successful records – winning more games than they lost or tied; for France, Scotland and Italy, it is a different story.

Turning to the 30 “upset” games in the second half of the table, we see that Wales has been involved in 13 such games, with 11 upset wins against 2 upset losses. Welsh teams have come to play and left with a positive 9-game differential. Italy is the only other team with more upset wins than losses, but almost every win by Italy has been an upset win as Italy has almost always been predicted to lose its matches. Italy was the sixth-ranked team every year except 2013, when they were ranked fifth.

Looking at the five most recent upsets, for the years 2017 and 2018, we see that Wales and Italy were involved in no upsets. Scotland, France and Ireland were involved in one, two and three upsets, respectively, admirably scoring more upset wins than losses. Then we come to England, and its uncharacteristically poor play in 2017-18, leading to four upset losses. England placed fifth in 2018. Conclusion: in 2017-18, teams have been more consistently predictable based on pre-competition ratings, except for England.

Now, what can we say about the 2019 competition?

Here are the ordinal rankings and World Rugby ratings of the six teams, after the last pre-competition adjustment on 6 January 2019.

After adding three rating points to each home team rating, the predicted wins are: Ireland (5), Wales (4), England (3), Scotland (2), France (1) and Italy (0). The champion may be determined in round 5, when Wales (rated 90.24 including home advantage) plays host to Ireland (91.17). The World Rugby System favours Ireland with a probability of 54.6 %. Considering that Wales have earned 11 upset wins in eight years and are playing at home, Wales could go top in what ought to be an exciting and well-played game; so, well worth watching. England must score upset wins (as per World Rugby ratings) to become competitive.