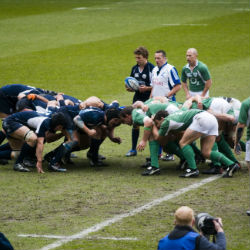 As the 2013 edition of the Six Nations Championship wraps up this weekend with a virtual final at Millennium Stadium, a decision at the next board meeting may change future competitions. Currently, the Six Nations Championship is the only major rugby competition that does not include bonus points. In most other competitions, including the Rugby World Cup, four points are awarded for a win, two points for a draw, one point for losing by seven or fewer points and one point for scoring four or more tries. A similar system is included in competitions organized by the French Professional League (Ligue Nationale de Rugby), except that the try bonus is awarded for scoring three or more net tries (tries scored minus tries conceded).

The announcement earlier this year that bonus points may be introduced to Six Nations league tables has ignited a scrum amongst fans. Supporters of bonus points assert that bonuses add definition to league standings and may keep fans interested in games whose outcome is clear but that still offer opportunities for bonus points. Purists, on the other hand, argue that officials have taken their eyes off the ball, as bonus points will infringe on the Six Nations’ long and successful tradition. The same critics claim that bonus points should be given a red card as such a system would make it possible for a team to beat all other teams (and achieve a cherished Grand Slam) but finish in second place. Such a situation would have occurred in 2002, where England, courteous of a pile-up of try bonuses, would have claimed the titled ahead of France, who completed a Grand Slam. To avoid such an outcome, some commentators suggest that a bonus worth three points should be awarded for completing a Grand Slam.

To add objectivity to the debate, statistics can be used as a referee. This is achieved by constructing strength measures based on wins, draws and potential bonuses and using a prediction model to determine bonuses that are significantly correlated with team strength. Intuitively, bonus points that assist the identification of strong teams will be significant determinants of match outcomes, while bonus that are not related to team strength will be insignificant in the prediction model.

Applying this methodology reveals that bonuses for (i) losing by seven or fewer points or (ii) scoring three or more net tries are correlated with team strength, but a bonus for scoring four or more tries is not. One reason why the four-try bonus is insignificant may be that, in certain circumstances, it may be easier for a weaker team to earn this bonus relative to a stronger team. Specifically, a team that is losing by a large margin may benefit from the opposition substituting key players, while a team losing by a small margin would likely face a full-strength team for the entire match. Additionally, the four-try bonus favours a team with a strong offensive and weak defence relative to a side with a weak offense and a strong defence. The net-try bonus, however, is not subject either criticism.

The results also reveal that awarding a bonus for completing a Grand Slam is not significantly correlated with team strength. This finding suggests that, under a system that most accurately ranks teams from strongest to weakest, a Grand Slam winner is not necessarily the strongest team and may not win the Six Nations title. However, the likelihood of Grand Slam winner missing out on the title could be reduced by using the number of wins as the first tiebreaker when teams have an equal number of competition points (as applied in Super Rugby since 2011), rather than points difference from all matches. Under both bonus systems, France and England would have finished with 21 league points in 2002, but France would have been crowned champions if the number of wins was used to separate teams with an equal number of points. A complete list of ranking changes due to bonus points since 1993 is provided in the table below (where season net points are used to separate teams with an equal number of competition points).

Overall, the results suggest that including carefully-crafted bonuses in Six Nations league tables will more accurately rank teams according to their ability than rewarding only wins and draws. If bonuses are included to reward strong teams, the Six Nations Championship should adopt the bonus system used in French domestic competitions rather than that used in the Rugby World Cup and elsewhere. 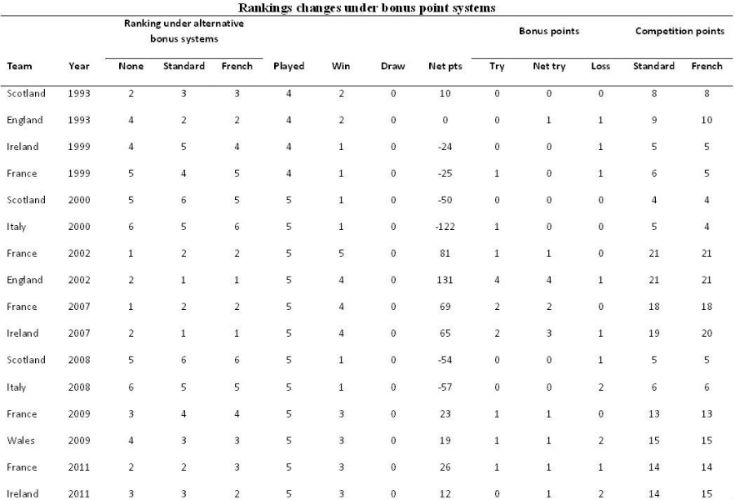