Lance Armstrong, Oprah, seven in a row and the weather: when should we get suspicious?

Lance Armstrong has confessed to Oprah Winfrey that all seven of his Tour de France wins were on drugs. Should we have known before? Seven Tour de France wins in a row – how exceptional is that – how likely that it could be done by a superlative sportsman unassisted by performance-enhancing drugs? In statistical terms - how much of an outlier was that seven-in-a-row streak? Should it have raised more than vague suspicions?
The obvious place to look first is at other Tour winners. Has anyone else come close to seven in a row? A list of all winners since the race started in 1903 is here. It shows that Jacques Anquetil won four times in a row, (1961-64) with an earlier win in 1957; Eddy Merckx also got four-in-a-row plus one (1969-72 and 1974); Bernard Hinault has won five times but not very consecutively; but Armstrong’s closest rival is Miguel Indurain who won five times in a row between 1991 and 1995. It is perhaps worth noting that had Eddy Merckx won in 1973 (he did not compete in it) he would have had six in a row – still behind Armstrong; and that Merckx (whom Wikipedia says is ‘considered to be the greatest pro cyclist ever’) tested positive for drugs three times.
So seven on the trot is clearly unique - but other human beings beside Armstrong could in theory have achieved it (though Mr Armstrong told Oprah that in his opinion it could not be done undrugged.) But unlike, say, flying, it doesn’t break the laws of human physiology. It doesn’t need Superman from the planet Krypton to achieve it. But it is still a considerable outlier. 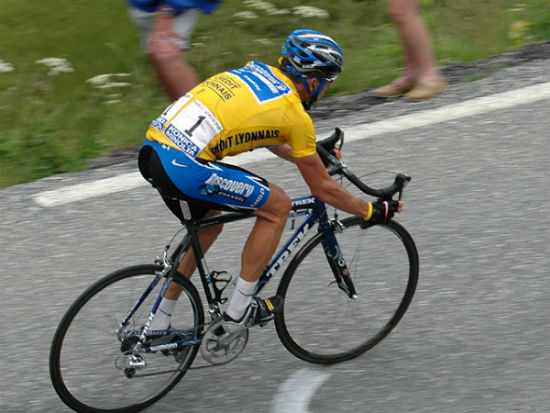 Lance Armstrong at the 2005 Tour de France. Image by Bjarte Hetland/Wikimedia.
How much of an outlier? That depends on our criteria. We have been assuming that the number of tour wins is our measure; but do they have to be consecutive wins, or just wins? That decision affects how exceptional you reckon Armstrong’s performance was. If your measure is consecutive wins, his seven is two more, a hugely whacking 28% more, than his only near rival, Indurain; if non-consecutive, he is just as far ahead in percentage terms but this time there is not one runner-up, but four – all the cyclists we have named have won five times apiece. So still exceptional, but conceptually not quite so much. If a proper statistician cared to interpret that data, and tell us how many Standard Deviations away from the mean number of wins of Tour de France winners Armstrong is, it would be useful.
Or would it? The database is of only about 67 names, most of whom won only once or twice; conditions in pre-war races were clearly very different; so it would make this exercise not as definitive as we might hope. And why should we choose Tour de France winners to give us our mean? Why not just Tour de France entrants (in which case the mean number of wins is pretty close to zero) or all professional cyclists (ditto), or indeed all the cyclists in the world? Our only decent conclusion so far is that what is exceptional depends on whom you are comparing against.
Secondly: That Armstrong won on drugs does not mean that he is not an exceptional athlete. He claimed on Oprah that he had to take drugs to make a level playing field. In other words, very many of his competitors, the people he was riding against, were on similar drug regimes. And he still beat them, seven times in a row. If cycling had been, apart from Armstrong, a clean sport, then we could reasonably attribute his wins mainly to the drugs. But nobody seriously believes that cycling in the Armstrong years was remotely clean.
So what, if anything, can we actually infer from performance data like Armstrong’s? The extraordinary Olympic performance of China’s young swimming star Ye Shiwan came as a huge surprise – and gave rise to all sorts of rumours (for which there was no other evidence, if indeed her performance is evidence at all). Seven, however, is rather more than one.
Thirdly: is there a sportsman whose performance has been equally exceptional, equally outlying, equally beyond compare, whom we know, beyond the shadow of a doubt, to have been drug-free?
Oddly enough, there is. Not in cycling, but in cricket. Cricket is not normally associated with drugs; and Don Bradman in any case flourished before the drugs era. And his performance record, according to the statistician-cum-cricket-expert who knows (namely Frank Duckworth) was ‘the outlier of all outliers’. Bradman’s ‘average of almost 100 is nearly 40 runs more than any other batsman has achieved in the entire history of test cricket. There is no distribution one can invent that can accommodate the figure of the Don. It is an outlier, and would be rejected by any statistical test, but it happened.’ And it happened ‘quite simply because Don Bradman was far and away the best batsman there has ever been.’
And what has this to do with snow which has just begun to fall, as I write, outside my south-east-of-England window (and in London and much of Britain too), and the message I have just had from my childrens’ school telling me to collect them early because of it? The UK had its driest-recorded spring for over a century, followed by the wettest-recorded summer. Australia has just had its hottest temperatures ever recorded. This year the Arctic sea ice shrank to its lowest extent ever recorded and then contracted a further 500,000 sq km. The US experienced by far its hottest year on record. Nearly 15,000 new daily heat records have been set this year, and Europe had its warmest spring ever recorded. Globally, 10 of the 11 hottest years have now been in the last 11 years. 2012 broke the record for carbon dioxide concentration in the atmosphere. I could go on and on and on.
I could also misquote Oscar Wilde: To break one record might be a misfortune. To break seven, or ten, or however many weather records you care to work out that have been broken in the last decade – looks like rather worse than carelessness. It is too far outside the normal variation-prone state of things to accept unquestioned. It is just too much. It is a beyond-Bradman outlier.
Some of these, like some of Armstrong’s wins, might be part of the normal run of things. All records get broken eventually; someone has to win a bike race. But quantity should ring alarm bells. There is a time when you just have to cry ‘foul’ and say ‘Something not natural is going on here’.
Maybe it is after seven Tour de France wins in a row. Maybe it is after some other number of exceptional, extraordinary record-breaking weather years in a row, in some other number of aspects of weather and climate, in even more different parts of the world. I don’t know what exactly ‘some other number’ should be; but I am pretty certain that we are well past it by now.
The people who deny that this is unnatural, who say that climate change is not happening and the talk of it is all a conspiracy by scientists to give themselves cushy research jobs, are, frankly, missing it. You just don’t get that number of broken records in a row – in cycling or in weather. Not unless something is wrong.
back to top