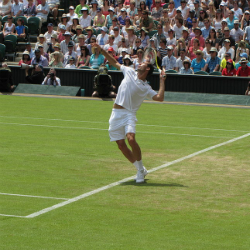 At the 2013 Wimbledon Championships, the top two seeded players reached the final of the men’s singles competition, while two relative outsiders reached the final of the women’s. Many commentators predicted close, exciting finals and appeared surprised when both matches were decided in straight sets. Is this as unlikely as it first appeared? To answer this I examined the results from all Wimbledon singles finals to see what the statistics tell us.

The first Wimbledon Championships was held in 1877, when Spencer Gore beat William Marshall to become the first men’s singles champion. The basic rules have remained unchanged ever since, with matches contested over a maximum of five sets, and the match ending when either player wins three. In the women’s competition, first won by Maud Watson in 1884, only two sets are required for victory. A match is said to be won in ‘straight sets’ if the set score is 3-0 in a men’s match, or 2-0 in a women’s match.

The table below shows the results, in terms of the set score, in all Wimbledon singles finals up to and including 20131. Even though we might expect many finals to be contested by two strong players of approximately equal ability, we can immediately see that the straight set scoreline is by far the most common in both the men’s and women’s competitions. Why should this be the case?

Looking at the simpler women’s data first, there are a couple of assumptions to take into account. We might suppose that first, in a particular final, the stronger player has a certain probability of winning each set. We might also propose that the outcomes of the sets are independent, so the outcome of each set is unaffected by what has happened before. We call this the ‘independence model’. It is simple to calculate the probability that the match will end in a 2-0 scoreline2. The image below (Figure 1) shows how this probability (p) changes (in practice we consider only p>=0.5 as the probability refers to the stronger player). 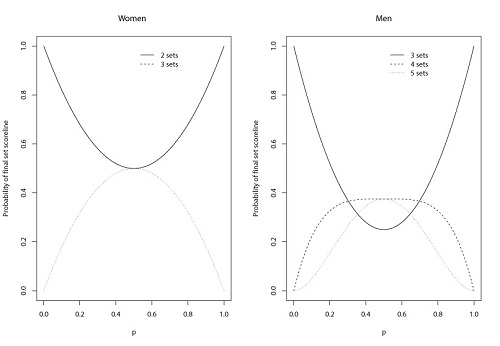 What we can see from this is, except when the players are perfectly evenly matched (p=0.5), the match is more likely to end 2-0 than 2-1. This perhaps should not be a surprise: for a match to finish 2-1, the player who won the first set, likely to be the stronger player, must lose the second. Note also that the chance of a 2-1 score under the rules is less than the chance of a 2-1 score, were the players to play three sets regardless of the score after the first two.

So for a 2-1 scoreline to be more likely that a 2-0 scoreline, not only would the set outcomes need to be dependent, but winning a set would need to confer a disadvantage to a player in the next. One might dream up several explanations for this seemingly improbable scenario, such as the winning player becoming tired or complacent, the losing player becoming more determined, or even a perceived advantage of serving in the first game of the set.

However, in this data-set we can see no evidence for this. The table below shows the order of sets won by each player in the finals that ended with a 2-1 score, with ‘A’ representing a set won by the eventual winning player and ‘B’ a set won by the losing player. As the frequency of the ‘ABA’ and ‘BAA’ patterns are similar, there is no reason to suspect that set outcomes are not independent. Indeed, the independence model fits the data extremely well3.

This means in a typical women’s final, we expect the stronger player to have an 80% chance of winning each set, which does not seem to be a formula for a close-run contest. This probability may of course vary from year to year – for every Venus Williams versus Serena Williams, there is a Martina Navratilova versus Zina Garrison. However, as Figure 1 shows, even on occasions when the players are more equally matched it is irrational to predict a 2-1 scoreline.

For the men’s data, we can also use the same probability formula2. The graph (Figure 1) shows that the straight set scoreline is no longer always the most likely4. However, 3-1 is always at least as likely as 3-2. A 3-2 scoreline requires the score to be 2-1 after three sets, and for the losing player (usually the weaker player) to win the fourth set.

What all this data shows is there is no reasonable scenario in which a 2-1 (women) or 3-2 (men) scoreline is logically the most likely outcome. This is supported by both historical data and modelling.

To predict such a score exposes either a lack of understanding of probability or a desire to ratchet up the anticipation of a match in the hope that it will be more thrilling than it is likely to be. Straight sets victories are common even when players are evenly matched. The 2014 Wimbledon women’s singles final will probably be decided in straight sets.