Danger on the slopes: how risky is skiing? 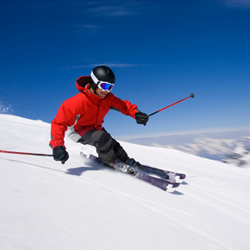 Skiing and snowboarding are the kind of sporting activities that can seem like one of the best sports to introduce your kids to one moment, then a potential death trap the next. This seasons skiing has brought notoriety to the sport through a couple of celebrity accidents on the snow. First came the worrying news that the seven-time Formula 1 champion Michael Schumacher’s life hung in the balance following a head injury in the Alps. Then, less life threatening, German Chancellor Angela Merkel fractured her pelvis on a ski holiday.

So do these incidents highlight an inherent danger with sliding down a mountain on flat objects strapped to our feet? Is this isolated to Germany’s most well-known personalities? The only way to find out is to get away from the anecdotes and take a bird’s eye view of the statistics.

Data from America’s National Ski Areas Association for the 2011-12 season showed that the fatality rate was 1.06 per million skier days, with only 0.001% of visitors suffering a major injury in the total days of participation during that season. More evidence from Scotland indicates that you would have to ski or snowboard for 447 days on average before you would sustain an injury. So when you consider this, snow sports are a relatively safe pursuit compared to other sports. You get a better understanding of the risks when the reason for accidents is broken down. Unfortunately, young men get just as bad a reputation on the slopes as they do on the roads, 85% of fatalities in the US are males and 70% are aged from late teens to late 30s.

This illustrates the most important point in answering the question of danger on the slopes, it depends on how much risk you take out there. Schumacher’s accident happened off-piste (away from the designated routes and trails) and this increases the risk even for advanced skiers. Avalanches and hidden rocks are not something skill can make up for in this environment as too much is left up to chance.

Better equipment has contributed to a drop in injuries as foot bindings have evolved to mitigate broken legs and helmets have become the norm. When Michael Schumacer crashed, his helmet split in two, but doctors said it probably saved his life. It was another celebrity tragedy in 2009 which triggered a new trend in ski attire. Actress Natasha Richardson died following a minor fall on a beginners run while taking a ski lesson. She struck her head but didn't complain that anything was significantly wrong until hours later, retailers then subsequently reported helmet sales rocketing. Some sources report no decrease in brain injuries from helmet use and other sources actively encouraging helmet use. In the absense of definitive statistics, it seems celebrity tragedies are having more impact on the use of safety equipment than actual evidence.

It’s probably better to use a helmet than not but after deciding on this, which is the safer option? Skiing or snowboarding? Jasper Shealy, a professor emeritus at the Rochester Institute of Technology, concluded that while snowboarders were between 50% to 70% more likely to get injured, they are also around 30% less likely to be killed on the slopes than skiers.

These pursuits are an individual sport, which means it is very difficult to measure the danger as each person in a resort behaves differently. Some will be clad head to toe in safety gear on easy routes and others will be out to push themselves on faster routes after a lunchtime beer. This may also account for why snowboarders have more accidents but fewer fatalities, skis are designed for speed whereas a snowboard is more adept at aerial tricks. More broken wrists perhaps but fewer head on collisions with trees.

So how do snow sports rank in the most dangerous sports tables? Not very high it turns out. Based on US government figures, Forbes ranked the top 10 sports by injuries and skiing and snowboarding came in at number nine. Which means using bicycles, footballs and treadmills could land you in a hospital sooner than a pair of skis.