Looking ahead to the Winter Olympics (by looking back)

Written by Michael Wallace on 06 February 2014. 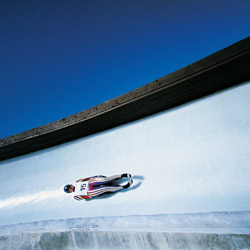 Fans of broken ankles rejoice! The Winter Olympics - that quadrennial celebration of people flinging themselves down mountains, flinging themselves off mountains, and doing things on ice that would be much easier to do not on ice - is just around the corner. Like millions around the world I'll be spending the next couple of weeks pretending to work while secretly watching these feats of human strength, skill and borderline insanity play out halfway across the globe.

Having recently moved to Canada from the UK, however, I find my loyalties split. On the one hand I've my plucky homeland to consider, whose recent emergence as a suspiciously competent force at the summer Olympics seems unlikely to translate to the snow and ice of Sochi. On the other, I now live in a country which is actually quite good at all this winter sports malarkey, and it's hard not to get caught up in the optimistic atmosphere. Fortunately, Team GB are unlikely to give their Canadian cousins much direct competition, so for the most part I'm hoping to get away with some bipartisan flag waving. My only fear is a (worryingly likely) Canada/GB curling final: I can already envisage my new Canadian friends sharpening their, er, brooms.

That said, UK Sport has predicted a bumper Olympics for British athletes (at least by our standards) with 3 to 7 medals expected to make their way back to blighty. Given our best medal haul for one winter Games was four (way back in 1924), and we only have 22 in total from 90 years of trying, this is certainly cause for excitement.

In fact, 22 medals is a fairly respectable number, putting Great Britain 21st in the all time medal count for Winter Olympics. However, data can always be deceptive, and as one of the 12 nations to have competed at all 21 Olympiads, we have something of an advantage on this count. Of those 12 Britain are a mere 10th, with only Poland (14 medals) and Hungary (6 medals) keeping us off the bottom. Ninth-placed France, meanwhile, are a whopping 72 medals ahead of us, so we won't be moving up this league table any time soon.

Total medals, then, only tells so much of the story. Instead, a better metric is average number of medals per Games attended, and you can see the top 10 on this scale below. Unsurprisingly, the Soviet Union come out top, averaging over 21 medals across the nine games at which they competed as a team. Germany is second, and therefore the highest ranked country still in existence, with 19 medals across ten games, while East Germany takes the bronze. Team GB, meanwhile, drops down to 26th.

The particularly keen Olympic afficionado may notice that I've left out the Unified Team of the former Soviet Union (except the Baltic States) from this calculation. They only competed in one Winter Olympics (in 1992) and won 23 medals, which would put them on top of this particular podium, but I can hopefully be forgiven for considering them something of an outlier.

I've also created a colour-coded map of these data, with darker hues corresponding to countries with a better medals-per-game ratio. (In the interests of avoiding geopolitical headaches I've ignored those countries that no longer exist.) It makes stark viewing for the southern hemisphere where only Australia and New Zealand have won any Winter Olympic medals. The more wintery climes of northern Europe, meanwhile, fare predictably well. 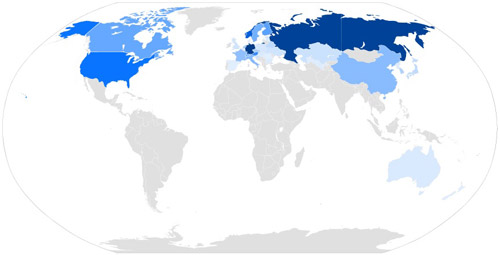 This might suggest, then, that a fairly simple indicator of a country's performance at the games would be how northerly (or southerly) they are. However, this isn't just a geographical issue. While Britain's lack of mountains (or, indeed, snow) is a commonly cited source of our limited capacity for winter sports, our resources as a highly developed nation help make up for some of that. Moreover, countries further from the equator tend to be wealthier, and wealthier countries tend to do better at the Olympics. From my own brief dabbling with the data, I found that while there is evidence of a link between how northerly (or southerly) a country is and its performance at the Winter Olympics, once you take its GDP into account this relationship disappears. Statistically speaking we're dealing with a 'mediator' - on first sight it may seem there's a relationship between latitude and medals, but it's acting as a proxy for the underlying wealth which really determines who gets gold, silver or bronze.

As is so often the case in statistics, however, the real answer is likely to be far more complicated. A country's latitude was unlikely to be a good predictor of Winter Olympics performance compared with more nuanced factors such as climate and culture. Nevertheless, it's a fun demonstration of how looks (and data) have the potential to nudge us towards misleading conclusions.

Here's to an entertaining two weeks of Olympic competition, and perhaps even some British success to cheer up those long winter evenings. (I shan't wish for Canadian success; that's something of an inevitability.) Do spare a thought, though, for the 14 athletes from Greece and Argentina. They'll be trying to help their countries shake off an unwanted title: most Games without a medal. Miss out in Sochi and it'll be 18 and counting. But still, 'the important thing in the Olympic Games is not to win, but to take part'.