Which gender has a better competitive balance in Grand Slam tennis? 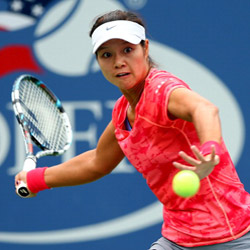 The heat was on this January during the 2014 Australian Open with 40C temperatures putting pressure on the top seeded tennis players and many lower seeded players doing the same. On the men’s side, 8th seed Stan Wawrinka upset 1st seed Rafa Nadal in the final. On the women’s side, while 4th seed Li Na was able to restore order by beating the irrepressible 20th seed Dominika Cibulková in the final, many more high seeds fell by the wayside earlier in women’s competition.


On the way to her final, Cibulková eliminated 3rd seed Maria Sharapova and 5th seed Agnieszka Radwańska (who herself had upset 2nd seed Victoria Azarenka). The 14th seed Ana Ivanovic upset 1st seed Serena Williams, before she was upstaged herself by 30th seed Eugenie Bouchard. Those upsets made for a very lively and sold out tournament, so I decided to look into the competitive balance of men and women in Grand Slam tennis.

The structure of the Australian Open is the same as for the other three Grand Slam tournaments which follow in chronological order: the French Open, the Wimbledon Championships and the US Open. For men’s and for women’s singles events, 128 players begin play, 32 of whom are seeded so that the best players (if they get that far) will meet later in the competition.

Seeding order follows ranking position as published by the men’s Association of Tennis Professionals (ATP) and the Women’s Tennis Association (WTA). The ATP and WTA assign points after each tournament, big or small. A player’s points are almost doubled after each winning round of a given tournament. The points for each tournament depend on importance (usually measured by money at stake), with the four Grand Slam tournaments having the highest point values. Points are accumulated over the most recent 52 week period.

The relative success of male and female higher-seeded players against lower seeded (or un-seeded) players provides a way of evaluating competitive balance. During the 2014 Australian Open, for example, higher seeded men won 72 of 90 matches (80.0% success) while the similar figure for women was 66 of 87 (75.9%). Arguably, there was better completive balance among female seeds compared to their male counterparts. As we shall see, that relationship has changed in recent years.

How Times Have Changed 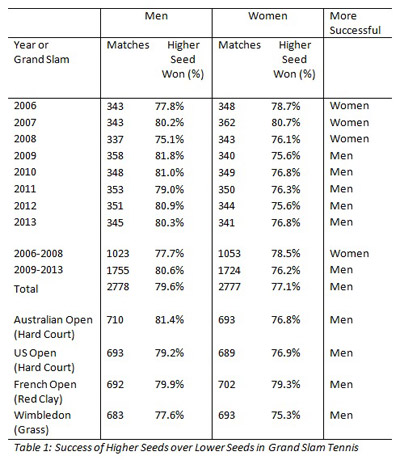 The top part of Table 1 (right) traces the recent history of the success of higher seeded players versus lower seeded players for both genders. Data for the four Grand Slams are combined for each calendar year. Notice that for 2006-2008, the women’s higher seeds were more successful for each of those three years. Then the trend reversed for the more recent five years of 2009-2013. The men’s higher seeds were more successful in all five years. It is tempting to blame that reversal on the emergence of the three dominating male players who won 29 of the 32 Grand Slam titles.

Rafa Nadal won 12, Roger Federer won 11 and Novak Djokovic won 6. The remaining three went to Andy Murray and Juan Martín del Potro. That would only explain part of the shift toward women having better competitive balance. According to Table 1, while it is true that the men’s higher seeds become 2.9% more successful during 2009-2013 compared to 2006-2008 (80.6% versus to 77.7%),  at the same time, women’s higher seeds became 2.3% less successful (76.2% versus 78.5%) for a net change of 5.2% toward better competitive balance among women. Relative to men, women now have a better competitive balance (less successful higher seeds) by 4.4% in the recent period (76.2% for women versus 80.6% for men). In contrast to the five men that captured their 32 Grand Slam titles: it took 14 women to win their 32 trophies.

Perhaps a better spectators-eye view would be to look at the absolute number of seed-wise upsets. For 2009-2013, there were 340 upsets in men’s play, compared to 410 upsets in women’s play, 21% more for the women. Viewed in that way, the excitement of realizing that a lower seed has a fighting chance is arguably a significant factor why women's tennis rivals men's for popularity.

The bottom part of Figure 1 contains aggregated data for the eight competitions of each of the four Grand Slams from 2006-2013. The Grand Slams are listed by court surface. The Australian Open and the US Open are played on a hard court. The French Open is played on red clay while Wimbledon is played on grass. Data for women appear to reveal court-surface preferences by top seeded players. The all-court average for women is 77.1%. Higher seeds were about 2% below average in success on the grass of Wimbledon. They were about average on the two hard court Grand Slams and were about 2% more successful than average on the clay court of the French Open. That data suggests that female higher seeds prefer the slower ball speed and baseline game as played on a clay courts. Also, they are most challenged on grass where the exacting demands of that surface may dull the edge of top players. The surface is unforgiving as is the serve-and-volley game required to play on grass.

The data for men are not distributed in a way yielding a simple tactical explanation. Male higher seeds won 79.6% of all matches. They were 2% less successful on grass, as was true for the women, with the same explanation as just given. It is confusing that male higher seeds were of average success on both the US Open’s hard court and the French Open’s clay while winning 2% more than average on another hard surface, that of the Australian Open. That paradoxical data awaits explanation on tactical preferences.

Higher-seeded male tennis players for the 32 Grand Slams played from 2006-2013 won 79.6% of 2778 matches while their female counterparts won 77.1% of 2777 matches. Although the ranking system is quite simple, the success of higher seeds provides validation for it. In the more recent period 2009-2013, women’s higher seeds won 76.2% of the matches compared to 80.6% for men, indicating a better competitive balance which helps fill seats. The more recent period is opposite to the period 2006-2008 when female higher seeds won more often than men did.

Higher seeded women were most successful on the clay court of the French Open (79.3%) and least successful on the grass of Wimbledon (75.3%). For the men, the greatest success came on the hard court of the Australian Open (81.4%) and the least success occurred on the grass of Wimbledon (77.6%). The grass court appears to be more of an equalizer than clay and hard courts. The greater competitive balance shown by women and exemplified by the grace and charisma of the up-and-coming Dominika Cibulková's of the world is an engaging and welcome trend in sport.