Olympic speed skating and why all ice is not created equal 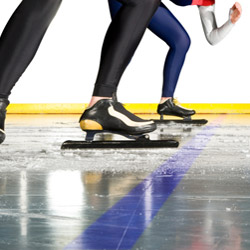 The Sochi Olympics added another chapter to the history of Olympic speed skating. An Olympic champion succeeds because of physique, training and efficiency, which in turn, depends on coaching, technique, equipment (drag-reducing suits and clap skates) and ice conditions. Of those factors, ice conditions can change the most from one Games to the next. Ice technicians at Sochi controlled temperature, humidity and ice hardness. But how do their efforts compare with their counterparts from the past?

At Cortina, Italy in 1956, the 5.20% %I/O for men represented an increase of 471% from the average of 0.91% for 1924 to 1952. All ice is not created equal. The site at Lake Misurina was located 1750m above sea level, an area that was dry and wind shielded, but he ice technicians wanted more. An ice-free oval channel was cut about one foot in width completely surrounding what would become the skating rink, preventing heaving and cracking.

The Russians re-entered Olympic post-war competition that year. When some skaters’ practice times exceeded their best previous times, they measured the rink (not wanting to lose any eventual world records). The length was correct and moreover, their measuring device recorded unprecedented smoothness. That was to be the best ice anyone had ever skated on, thanks to those tireless ice technicians.

The indoor ice at Calgary in 1968 was also exceptional. At 1080m above sea level, the area was dry, like Cortina. The temperature and humidity in the ice rink was carefully controlled. The %I/O for men was 5.16%, only marginally less than at Cortina. Women experienced their greatest one-time average improvement of 4.44%. Cortina and Calgary can share the best-ice gold medal.

Improvements in 1980 and 1994 were only partially due to good ice. In 1980, East Germany and Russia challenged each other and Eric Heiden (USA) broke records. In 1994, the Games were held in Scandinavia, a hot bed for the sport. Johann Olav Koss (Norway, men) and Bonnie Blair (USA, women) provided improvements in the 1990s.

A third consecutive large %I/O followed at Salt Lake City in 2002 (3.14% for men and 3.17% for women). The rink was located 1280m above sea level and again conditions were dry. Technicians created an outstanding climate control system. Salt Lake was a tough act to follow: performances were worse in 2006 and about the same in 2010 as in 2006.

That brings us to Sochi. Again, technicians created an impressive climate-controlled system. The result was the first real improvement since Salt Lake (men improved 0.98% over 2010 while women improved 1.76%). Still, only 4 out of 10 winning times were better than at Salt Lake. So the all-time good-ice medals go to Cortina, Calgary and Salt Lake City.

As to gender equity, women improved more than men during the second period (while catching up in terms of training and coaching) until women skated 91% as fast as men, just as they do today. Women are also 91% as lean as men, that is, relative velocity is now driven only by physiological difference.

The torch has now passed. The ice technicians at Pyeongchang have their work cut out for them. The speed-skating youth of the world are challenged to gather in Korea in 2018 and finally improve upon the times set in Salt Lake City.