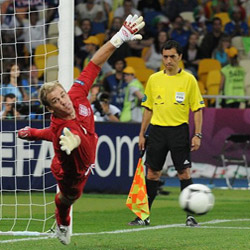 There's an unusual lack of optimism surrounding the England football team heading into this World Cup; for the first time in (my) living memory no-one is talking about how it 'could be our year'. In fact, there's a very real risk that England won't even make it out of their group with Uruguay and Italy slight favourites to advance to the round of 16. While going out in the group stages is on nobody's wish list, it nevertheless comes with one crumb of comfort: no penalty shootouts.

It hasn't even been two years since England were last knocked out of a major tournament on penalties, going down to Italy in the quarter-finals of Euro 2012. This marked our sixth failure in seven attempts, our only success coming in Euro 96 before that semi-final loss to Germany. 'England can't win on penalties' has become a common refrain of pundits and armchair managers alike. Certainly, one win in seven isn't great, but how bad is it really?

A quick comparison with some of our fellow Europeans can shed some light on the matter. If we consider countries that have competed in at least five shootouts then only the mighty Germans have what looks like a 'good' record. Spain, France and Italy, meanwhile, are all relatively close to a 50/50 split while the Netherlands have won just once in five attempts.

Italy's record was considerably boosted by that last win against England: had they lost their success rate would have dropped to 25%, which sounds a lot worse than the 38% they now have. (England's, meanwhile, would have leaped to the dizzying heights of 29%.)

There's no escaping the fact that England are rock bottom of this particular league table, but a more statistical look at their record can offer some encouragement. Let's suppose that going into each of their penalty shootouts England's chances of winning were 50% - the same as the opposing team.

In statistical terms this is our null hypothesis, and we'd like to know whether there is enough evidence to suggest that England's real chances of winning penalty shootouts are worse than this (our alternative hypothesis). We do this by asking ourselves the question 'If England had a 50% chance of winning every penalty shootout, then how unlucky would they have to be to wind up with such a bad record just by chance?'.

Conveniently, this is fairly easy to work out: it's the same as the odds of tossing a coin seven times and getting one (or zero) heads, which is just 6.25%, or 1 in 16. So if England were as good as their opponents at penalties, there's a 1 in 16 chance that they'd have a one win in seven record (or worse) just down to bad luck. That's a fairly low probability, but it's not that low: a statistician would typically want to see a chance of less than 1 in 20 before seriously considering the alternative conclusion that England are worse at penalties (although of course, this is just another arbitrary cut-off). That said, this would happen if England lose their next shootout, whenever that happens to be.

So, England can't win on penalties? The jury is still (just about) out. One more loss, however, and even the statisticians may have to agree. No pressure there then.