The World Cup group stage: predictions through the betting markets 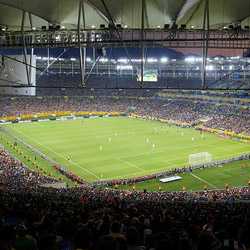 The FIFA World Cup is just round the corner, kicking off in mid-June and ending in mid-July. Now by this stage, you may have already clicked away as you possibly dread having to hear about it all the time for the next few weeks. You may be looking for an alternative place where you will not have to hear about it – good luck with that!

For the rest of us who are already converted, this is pure bliss. We get to watch national teams play football and discuss/predict/yell at/celebrate (choose any) games and tactics. The competition starts off with a group stage in which the qualified teams are subdivided into eight groups of four teams each.

Each team plays against every other team in the group and is awarded three points for a win and one point for a draw. These points are the key criteria used to rank teams such that the top two teams per group qualify for the second round. In this article, I try to make some group stage predictions based on the expected outcomes as implied by betting odds as of Monday June 2.

The betting market has not yet fully settled for all games and the most likely score could only be obtained for the first 17 games. For example betting on Brazil winning 2-0 in their opening match against Croatia would yield the lowest return from all scores, making it the most likely score. In this game, betting markets are implying that Brazil have a 75% chance to win the match while Croatia have a 7% chance of winning. The remaining 18% relate to the probability of the game ending in a draw.

As an example, consider that the match Japan vs Colombia has a 30.4% chance of a draw and was predicted to end 1-1. Furthermore, the score for Algeria vs Russia was predicted as 0-1 since there is less than 30% chance of a draw and Russia has a 53% chance of winning. This simplistic procedure loosely follows a paper I jointly published last year. However in this case, the number of goals scored is a subjective decision based on my own thoughts rather than any objective criteria.

I also made three exceptions to the above:

These predictions form my submission for a free World Cup prediction competition in which participants attempt to guess the outcome of group stage matches. Participation is free but the top ranked individuals can win real prizes, including £80/€100 cash as first prize – it takes less than 10 minutes to participate! You can also follow updates on Facebook.

In a later article to be published on Thursday, I will discuss the betting market’s expectation of the second and final rounds as well as making a cheeky prediction. In the meantime, here is my predictions for the 48 group stage games.