To win the World Cup, you need to win your group 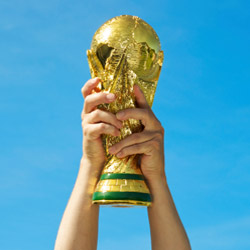 With the World Cup well and truly underway television pundits are already consulting their football abacuses to calculate how various teams can escape the hectic group stage. While some more statistically-minded types (including our very own Gianluca Baio and Marta Blangiardo) have produced some rather more sophisticated forecasts of each team's prospects in the rest of the competition, I thought 'it's Friday, let's keep things simple'.

With various teams' hopes (including England's diminishing dreams) pinned on scraping through their respective groups, I took a (much more simplistic) look at whether group stage performance alone tells us how a team will fare further down the line. If you're still recovering from a football hangover then don't worry, this is 'stats-light', but it provides a couple of extra facts to drop into conversation next time someone asks if you saw that ludicrous display last night.

As anyone who has got this far into a World Cup article without tabbing away probably knows, the current World Cup format sees 32 teams initially separated into eight groups. The top two in each group go through to the next round while everyone else starts the (potentially rather long) trip home. This format is, in fact, relatively new, having been introduced in the 1998 World Cup in France. The previous three tournaments featured 24 teams in (you guessed it) six groups of four, with the top two from each joined by the four best third-placed teams in the next round. Previous years had more complex structures which I shan't go into here.

I wanted to know how important a team's final position in their group is in terms of their overall chances in the tournament. Obviously you need to at least make the top two (or three way back when), but does a team's group stage performance tell us much about their longer-term prospects?

Looking back over the last seven World Cups (see figure below) a fairly clear pattern emerges: those teams who win their groups generally go on to do better than those who finish second or (when appropriate) third.

In fact, every single World Cup winner since 1986 also won their group, sneaking through in second is probably just delaying the inevitable. Predictably, these teams had strong records in the group stages (although perhaps not as strong as you'd think) with just two teams coasting through with three wins while a further four emerged with seven points from two wins and a draw. The one exception is Spain who, in their opening game in 2010, suffered a shock defeat to Switzerland. Ultimately they went on to become only the fourth team to win the World Cup despite losing a game but it was a rather inauspicious start (though perhaps not quite as inauspicious as this year's performance).

Slightly more formally, we can do a simple statistical test to show that it's unlikely that this apparent relationship between group position and tournament performance is down to chance alone. Unsurprisingly while winning one's group is a significant indicator of future success, there's little to choose between second and third (although with only 12 third-placed teams in the dataset this really isn't saying much). Obviously, much of this will be down to the tournament structure, wherein the reward for winning a group is avoiding a fellow group winner (and so presumably stronger opponent) in the following round, but it's perhaps still a touch surprising that no second-placed team has managed to go on to lift the trophy.

Can these data tell us much else? I was interested, for instance, to see if points scored in the group stage regardless of finishing position could give an indication of a team's strength - does a team finishing second with seven points do better than a team finishing second with three? (And just in case you're wondering, I've retrospectively applied the 'three points for a win' rule to the pre-1994 tournaments.) The (admittedly weak) evidence is no: the points you score aren't particularly informative, just where you finish in the group. However, with a relatively small dataset this evidence is fairly weak, we'll need a few more World Cups before we can be a bit more certain.

For now, at least, take heart if your chosen team can still top their group, and condolences if they're already eliminated. For those of us whose teams may just miss out on second spot, meanwhile, the water cooler line is already prepared: 'ah well, we wouldn't have won anyway'.