How surprising was Brazil losing 7-1 to Germany? 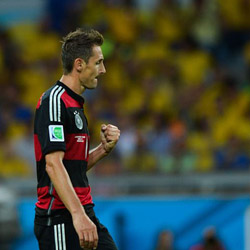 On July 8, at the Estádio Mineirão in Belo Horizonte, Brazil lost 7-1 to Germany in the first semi-final of the 2014 World Cup. Much has been written about this match, for instance it generated 35.6 million tweets making it the most-discussed single sports game ever on Twitter.


The New York Times provided an excellent one-sentence summary of what happened on the pitch: 'The Germans were merciless, playing with grace and unity and a raw power that saw them rip open the Brazilian defense as if it were a can of soup.' Shocking, tragic, stunning are among the adjectives applied to the match's result but can we call it surprising?

Suppose that events V1, V2, …  occur with probabilities p1, p2, …; the surprise index associated with an event Vi, say SIi, compares the expected value of these probabilities with pi, and this can be written as SIi = E(p)/pi = (p12 + p22 +…   )/pi. Following Weaver, this quotient measures 'whether the probability realised, namely pi, is small as compared with the probability that one can expect on the average to realise, namely E(p). If this ratio is small and SI correspondingly large, then one has a right to be surprised'. Weaver went on to suggest the classification shown in Table 1:

Clearly seven goals is a discrepant observation, and this is confirmed by Grubbs' test for one outlier which yields p-value = 9.5×10-7, but, as we have seen, this is not necessarily the same as being surprising.

Though often goals scored against a a team follow a Poisson distribution, these data show evidence of overdispersion: sample mean = 0.951, sample variance = 1.341, and the Neyman-Scott statistic leads to reject the null hypothesis of Poissoness (p-value< 0.001). A negative binomial model fitted the data significantly better than a Poisson model, and its probabilities can be seen in Figure 1. 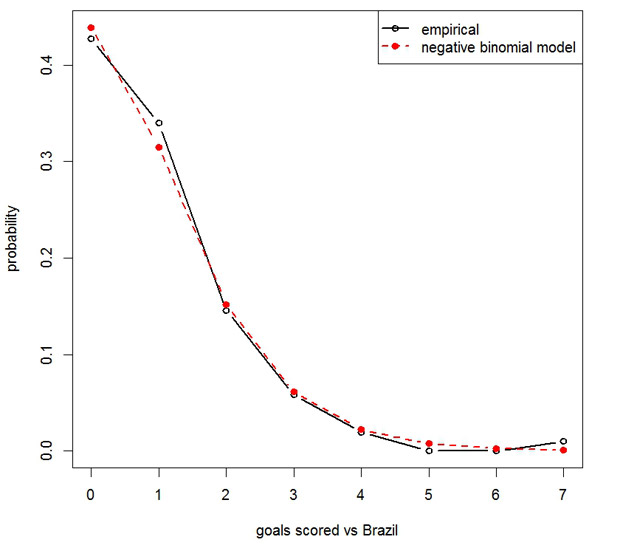 Using this model, I calculated the surprise index for values of goals scored against Brazil between 0 and 8 (Table 3).

This brief analysis implies that last week's result is rare and very much out of line with Brazil's previous performances in World Cup finals, but can't be considered definitely surprising according to Weaver's criterion - to establish such result at least another goal would have been needed.

Randomness is an integral part of football at all levels, and sometimes these uncontrolled variations produce strange, seemingly extreme results but we shouldn't be completely surprised when they appear, these things happen: as RA Fisher wrote: 'For the "one chance in a million" will undoubtedly occur, with no less and no more than its appropriate frequency, however surprised we may be that it should occur to us.'

Anyway, it’s only a game…