Olympic medal count at Rio 2016: What to expect for the host nation, top nations and those sitting sports

The London Games have now come to an end and the city adjusts itself back to a more normal and recognisable setting. The host nation, Team GB, was honored with a victory parade on the streets of London yesterday with thousands lining the route and cheering the athletes on.

Australia brought 'sitting sports' into the vernacular when it was claimed that Team GB was fattening its medal count by relying on an unusually great expertise in sitting down. A quick look at the London 2012 medal table suggests otherwise. Team GB won four medals in canoe/kayak, twelve in cycling, five in equestrian, nine in rowing and five in sailing, totaling 35 seated medals of their 65 medals won (54%). Meanwhile, Team Australia won two in canoe/kayak, six in cycling, five in rowing and four in cycling, for 17 seated medals of their 35 (49%). In fact, both nations won about half their medals in the seated posture. Teams GB’s upright total of 30 medals is within five medals of Australia’s all-posture 35. It is likely that both Commonwealth nations will score about half its medals in each posture when the Games visit Rio.

Starting with Melbourne 1956, Table 1 contains data for 13 fully attended Games through London 2012 (excluding the boycott years of 1980 and 1984). Summarized in Table 1 are medals earned four years before being host compared to the year as host. The average gain as host is 13 medals, the same figure as for the 12 fully attended Games prior to London 2012. Table 1 also shows the residual affect four years after being host. The average host nation earned seven fewer medals four years later based on the 11 Games with follow-on data (Canada did not attend in 1980 and of course Great Britain has yet to compete in Rio). That seven medal figure is also unchanged from the 10 Games figure reported previously in Significance. 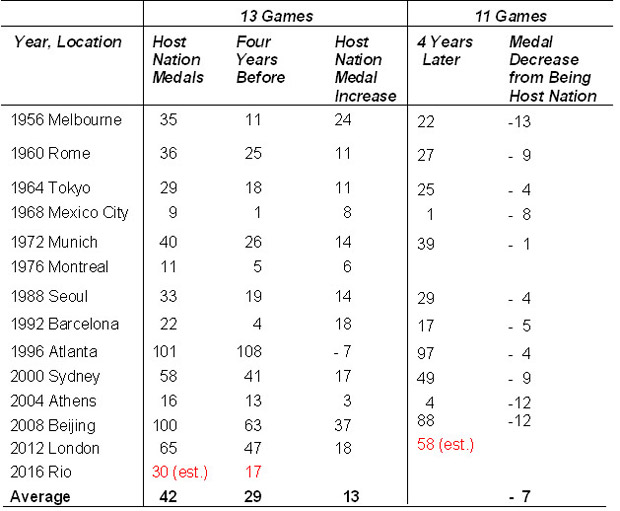 The projection for Team GB in London was found by taking the 47 medals from 2008 plus the typical gain of 13 giving 60. As for China, the projection for 2012 was found by taking the 100 medals won in 2008 minus 7 giving 93 medals. The total projection for Team GB and China was 153 medals. In fact, Team GB exceeded expectation earning 65 medals while China underperformed by five medals earning 88. The actual total for those two nations was 153 as projected. That close approximation demonstrates the usefulness of taking averages.

We can now project a medal count for Team GB and for Brazil in Rio 2016. Team GB should earn seven less than in 2012, an estimate of 58 medals, while Brazil should benefit from being the home nation by adding 13 medals to its 17 earned in London for a haul of 30 medals at home. The estimated increase for Brazil from 17 to 30 (76%) appears to be rather large. Much larger percent increases were actually realized by past home nations. Australia went from 11 to 35 in 1956 (218% increase), Mexico from one to nine in 1968 (800%), Canada from five to 11 in 1976 (120%) and Spain from four to 22 in 1992 (450%). A host nation having previously earned few medals gets a relatively large boost from automatic qualification into many more events than the host nation would normally enter. Further, relatively more young athletes are enticed to compete in a nation with a modest program relative to a host nation that already has a large established program. Brazil may well achieve that 30 medal total.

Overcoming the Pressure to Succeed

The media had raised an alarm that the pressure of succeeding at home may might actually prove to be a detriment to Team GB athletes. How do world class athletes deal with the stress of competition and in particular, what can be done to deal with a home crowd? Two excellent books have been published recently that treat the psychology of winning under pressure. Sian Beilock wrote Choke: What the Brain Reveals About Getting it Right When You Have To (Simon and Schuster, 2010). Matthew Syed created Bounce: Mozart, Federer, Picasso, Beckham and the Science of Success (Harper, 2010).

Both books paint a similar picture. As an athlete first learns technique, a part of the brain is employed that takes each technique and stores methods in a slow and deliberate fashion. Meanwhile, with repetition, the autonomous part of the brain and body begin to take over. The more the athlete repeats good technique, the more automatic does a performance becomes. However, when an important throw, jump, serve, etc. comes up, if the athlete thinks about how important the next move is, then performance become driven by the slow working part of the brain and the athlete “chokes”, doing much worse than capable of. In a CNN World Sport interview, double Olympic decathlon champion Daley Thompson was asked how he dealt with home fan pressure in the UK. Thompson said that he welcomed fan support, but if he thought he would feel pressure, he practiced that much more. Team GB heptathlon champion to-be Jessica Ennis said much the same thing: she would practice that much harder to be ready for London 2012. Both athletes practiced what Beilock and Syed preached: practice enhanced the autonomous system, improving the likelihood of success.

What Nations Win the Most Medals?

To look forward to Rio 2016, we will look back to all the preceding Olympic Games to learn from the past. Table 2 summarizes the medal events, total medals given and the medal-winning success of the nations winning the most and the second-most total medals for each of the 27 contested Games of the 30 Olympiads of the modern era (no Games were contested for the Olympiads of 1916, 1940 and 1944 due to war). To compare nations over varying numbers of events, medal count was expressed as a percent of all medals available in a given year. Total medals awarded exceed three times the gold medal events because duplicate bronze medals are given in many combat sports.

Table 2: Medal Count for the Top Two Nations in Total Medals for All Olympic Games 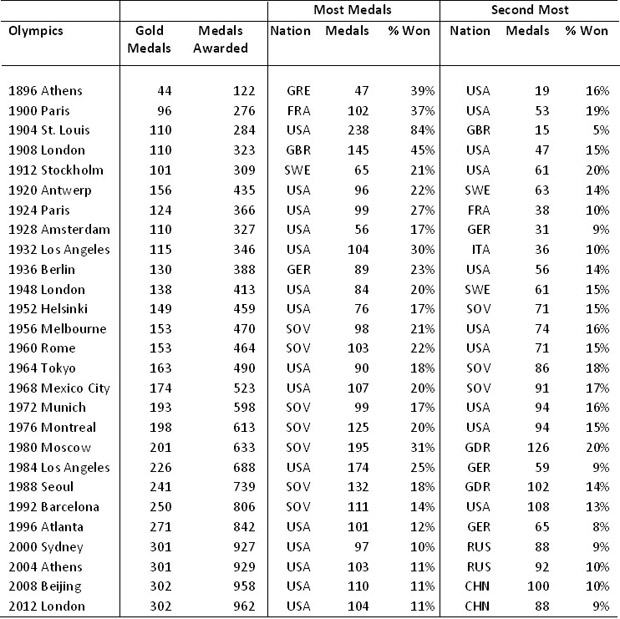 The home nation won the most medals in the first five Games (1896-1912) as the number of events expanded from under 50 to just over 100 events. The Games had not yet become a truly international spectacle. The USA won the greatest share of all time with 84% of all medals at home in St. Louis, 1904. In those early years from 1904 though 1920, the USA, Great Britain and Sweden lead in medal count. The ascendancy of Germany was visible as that nation won the second-most medals in 1928 and the most medals at home in 1936. The importance of being home nation was established early on.

A new world order emerged when East Germany competed for the last time in 1988 and the Soviet Union competed for the last time in 1992. Through 1988 the smallest share for the top nation was 17% of medals awarded. From 1996 onward, the largest winning share was 12%. Clearly, competition has become much more balanced with the demise of the Soviet Union and East Germany. Notice that the USA had top share in London 2012 with 11% and that there has been only one time in Olympic history with a smaller share by the top nation. China had the second most medals with a 9% share, where only two nations have been second with a smaller share.

What is there in this history lesson that can clarify what should happen in Rio 2016? First, the USA has been the top or second medal winning nation throughout Olympic history. The Americans have an established infrastructure that earned an average of 104 medals in the last four Games where the number of medal events had been stabilized by the IOC. The figure of 104 medals is a reasonable prediction for the Americans in Rio. China is a centrally planned economy which bodes well for future success ala the Soviet Union from 1952 to 1992. China has passed by the post-home-nation decline. China is capable of sustaining an 88-medal count for the near future, given infrastructure and an obvious commitment to sport (having 25% of the world’s population helps too).

Every nation cannot become a host nation to increase medal count but it is possible to emulate some practices used by the Soviet Union, East Germany and China to increase medal yield without also employing draconian measures. The key is to efficiently scour a nation looking good young athletes; but without also uprooting them from family and friends. Most nations have a powerful tool at their disposal: the Internet which is available at most schools. It is possible to create a standardized family of physical challenges to test basic agility, strength, reaction and stamina. These results can be copied onto standard data sheets and uploaded via Internet to a central facility. If the Internet is not available, such test results can be placed on disks and the disks mailed to that central facility. The results can be analyzed to efficiently find promising young athletes. A sport can be found to fit the skills of each athlete. Regional training facilitates can be created from existing facilities. A related technique is to scan the Olympic disciplines to target medal-rich sports that a given country can emphasize. The Olympic motto, “Citius, Altius, Fortius” does not mean to defeat opponents. Dominican priest Henri Didon coined that phrase in 1891 asking that each athlete should take that person’s given talents and try the utmost to run faster, jump higher and be stronger than before.

That is the Olympic ideal and opening the Games to many more young people would further Father Didon’s motto as the youth of the world assemble in Rio, four years hence.