How exceptional a rugby player was Brian O’Driscoll? 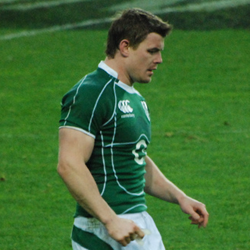 Brian O’Driscoll enjoys legendary status among Irish sports fans. The public perception of O’Driscoll is one of a truly exceptional player who stood apart from his peers in the era of professional rugby. Yet many rugby fans outside Ireland, while recognising that he was a great player, perhaps thought Ireland fans were inclined to exaggerate about his brilliance, especially later in his career.

The debate is understandable. When O’Driscoll burst on to the scene with a hat-trick of tries in Paris, his remarkable ability to change pace and direction was immediately apparent. As he matured, his contribution became a less obvious – a more subtle combination of passing, positioning and leadership.

So was Brian O’Driscoll truly exceptional? Generally speaking, it is very difficult to estimate an individual’s contribution to a team sport accurately. Descriptive statistics such as number of tries, assists, caps or trophies may be suggestive. But each depends on other factors including the quality of teammates, the player’s position and perhaps most importantly, whether the player is selected to play in the first place. Because players are more likely to be selected when on good form, measures of impact based on the games they do play will tend to be biased upwards.

However, with O’Driscoll we realised that it was possible to produce a better estimate, because there is one sense in which his career is truly unique. For 15 years, if Ireland were playing frontline opposition, O’Driscoll was an automatic selection unless injured. Furthermore, throughout his career he missed games sporadically through injury, including at least once against all frontline international teams. So by treating injury as a random event, statistical estimates can be produced of O’Driscoll’s contribution to the likelihood that Ireland won or lost, or to the points difference between the teams.

As two economists and ardent rugby fans, once we had realised this possibility, assembling the data and running some models proved irresistible. What we found also surprised us.

We went back through the archives to extract the team-sheets and the results for all matches that Ireland played from 1999 through to the end of the 2014 Six Nations Championship, when Brian O’Driscoll finally retired from international rugby. Using fixed effects models to control for the opposition and for whether the game was home or away, we estimated that the O’Driscoll effect on the scoreboard was not only statistically significant, but amounted to fully seven points per game. Or in rugby terms, one converted try.

Given that more than one third of Ireland’s games during the period were won or lost by less than seven points, this a striking figure for the impact of just one player among 30 on the pitch. Moreover, we found no significant difference between the O’Driscoll effect early and late in his career.

To check that this contribution was genuinely unique, we also estimated the equivalent contributions of 21 other top Irish players from the professional era. Although selection effects might be likely to bias their contributions upwards, none was statistically significant and no player’s estimated impact came close to seven points. For comparison, our estimate of the overall impact of home advantage was 11 points.

These first models did not distinguish between the impact on the points difference in close games and the impact in games where the issue was merely the size of the winning (or losing) margin. Yet whether a match is won or lost matters more than by how much. So we also built binary probit models to estimate O’Driscoll’s contribution to the overall outcome of the game.

This turned out to be more surprising still. Again, the O’Driscoll effect was significant, but this time we found his impact on the probability of winning the match to be even larger than the effect of playing at home rather than away.

To give an idea of the scale of the O’Driscoll effect, our statistical models allowed us to estimate the probability of Ireland winning home games against frontline teams with and without O’Driscoll in the starting line-up. The estimates are provided in the chart below. 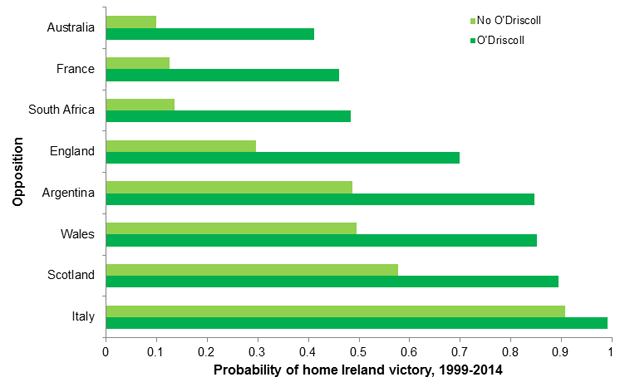 The impact of O’Driscoll’s presence on the probability of winning was, to say the least, large. Games against top international sides like Australia, South Africa and France, which would be highly likely to be lost in his absence, became inst­­­­ead evenly balanced. A two-to-one chance of losing to England became a two-to-one chance of winning when O’Driscoll played, while games against the other three Six Nations teams would rarely be lost.

New Zealand could not be included in this analysis, since Ireland have never beaten them. When we constructed separate ordered probit models for whether games were won or lost by less than one score, we found that when O’Driscoll was fit he had a similarly large impact on the outcome.

Of course, the method we have used is a statistical comparison of outcomes when O’Driscoll filled Ireland’s No.13 shirt, with outcomes when someone else did. So it might be argued that the results measure not how good O’Driscoll was, but how poor the available substitutes were. But this argument does not bear scrutiny because when O’Driscoll was injured, he was usually replaced by seasoned internationals able to play in multiple positions in the back-line, not by inexperienced players.

There was one other interesting finding that emerged from our analysis. When we used the same methods to gauge the contribution of other players to whether Ireland won or lost, two other players emerged as significant – Peter Stringer and Jonathan Sexton. The estimates of their contributions may be biased upwards somewhat, because each had periods of less good form during which they were not selected. But the finding is notable because it supports rugby folklore. One is a scrum-half, the other a fly-half, and wisdom has it that these positions (the half-backs) are the most crucial on the pitch.

In general perceptions are not infallible and biased perspectives are not uncommon. So it would not be surprising to find that fans tend to exaggerate their favourite’s heroics. Yet, on this occasion, the perception that Brian O’Driscoll stood out as a truly exceptional rugby international appears to be warranted.