One football referee makes every judgement decision, is that absurd? 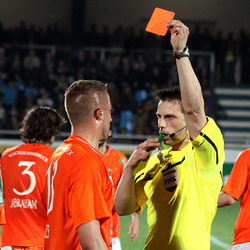 In last week’s Gold Cup semi-final between Mexico and Panama, Mexico escaped with a 2-1 extra-time victory. Like many recent CONCACAF games, a few referee judgment calls more or less decided the outcome. This game included an early red card to a Panama player, and a late penalty kick awarded to Mexico.

Much of the commentary after the game criticized the game’s referee, American Mark Geiger. However, I’m not quite sure Geiger’s to blame. Specifically, while I’m not smart enough to get into the technicalities of any football call, I did notice that Geiger was forced to make a red card decision from at least 40 yards away. This seems absurd.

Using the dimensions from each of the fields/rinks in the NFL, NBA, NHL, and FIFA, as well as each organizations respective number of officials, I estimated the amount of square footage that each referee is responsible for. For example, three NBA referees cover 4,700 square-feet, or about 1,600 square-feet per referee.

Here’s a chart with the estimated square-footage (in thousands) covered by each referee. 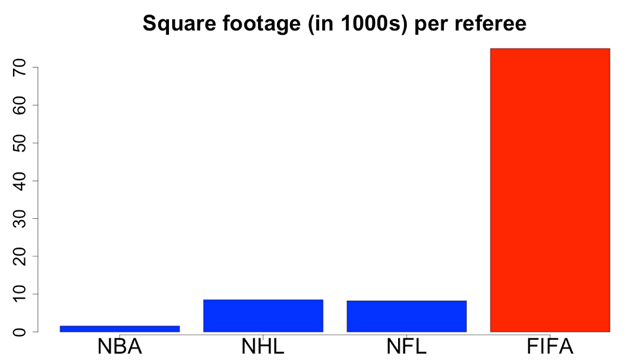 There are obviously several caveats with such a simple chart. NBA officials have to call a much larger assortment of violations than football ones, and NFL plays stop and start from one spot on the field, making it easier for the group of referees to reset. Further, its silly to think that putting a half-dozen more referees out there would make football games more equitable. Finally, I’m obviously aware that football has assistant referees, but from my perspective (like NHL linesmen) the role of assistant referees is secondary on the game’s most important decisions.

However, its patently absurd to blame referees for wrong calls when they are making the decisions from half the field away. Would we expect an NBA referee to assess a flagrant foul from the opposite end of the court? Or an NFL official to whistle pass interference from the opposite sideline?

Of course not, that would be crazy. But it seems just as crazy to blame football referees for failing a test that they never had a chance to pass. From a relative outsider’s perspective, an extra referee would yield more accurate calls and could help curtail diving. Football seems to be fixated with one referee being the sole arbiter, as the painfully slow implementation of goal line technology and additional referees demonstrates. How many more big games will have to end with an analysis of the referee's performance before FIFA looks at this issue seriously?

This article was first published on Michael's StatsbyLopez blog.