Who will win the Rugby World Cup? 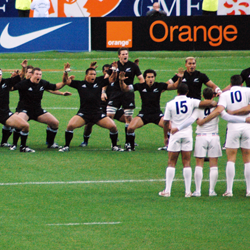 As Yogi Berra, once said: ‘It's tough to make predictions, especially about the future’. Like most future events, it is impossible to know for certain who will win the 2015 Rugby World Cup, but we can estimate probabilities of various outcomes occurring. We do this by building a rating system for international rugby matches and using these ratings to estimate expected score margins (like who will win and by how much.) We can then characterize uncertainty around these predictions.

In the following analysis, I use the rugbyvision.com algorithm to rate teams. This scheme is an Elo-type system specifically designed to represent international rugby games. The Elo system, named after Arpad Elo, was originally invented to rank chess players and is now used in various other games and sports. In the Elo system, ratings points are based on past performances and differences in ratings points reflect relative strength. Our rugbyvision.com ratings employ a different system to that used for the official world rugby (formerly International Rugby Board) ratings, so our rankings differ from the official ones.

By design, the average rank across all teams is 100. New Zealand and South Africa are, respectively, the number one and two ranked teams. The next tier of teams is relatively tightly bunched and includes Australia, England and Ireland, with Wales just behind this group. Despite France’s win of England on August 22, Les Bleus have only won five of their last 14 matches and are ranked seventh.

Differences between rugbyvision.com rating points can be used to predict the average score margin for games played at neutral venues. For example, in a match at a neutral venue, New Zealand would be expected to, on average, beat South Africa by 8.5 points (130.3 minus 121.8) points, or 9 points when rounded to the nearest whole point. Home advantage is estimated to be worth 4 points, so this amount is added to the home team’s rating if applicable. In the 2015 World Cup, England will play all of their games at home, and Wales will have home advantage in two pool matches.

Predicting game scores using ranking points and (when applicable) home advantage, provides an estimate of the ‘average’ margin in a game between two teams. As a weaker team will sometimes beat a stronger team, to get the full picture, we also need to know the distribution of scores around the predicted average. To see why this is important, consider our New Zealand versus South Africa example: If the score margin was always within plus or minus nine points of the predicted average, New Zealand would be expected to win all games between the two teams.

However, if the score margin sometimes deviated from the predicted score by more than plus or minus nine points, South Africa would be predicted to win some matches in which the score deviation went in its favour. This uncertainty is characterised by estimating the shape of the distribution of score margins around the predicted averages. It turns out that, at current rating points at a neutral venue, South Africa is expected to win 27% of matches against New Zealand.

By combining team ratings and the distribution of score margins around the predicted averages, we can calculate the probability of teams reaching various stages of the 2015 World Cup, which are displayed in the next table1.

According to these calculations, New Zealand will almost certainly qualify for the quarterfinals, where they will likely play France, and there is a high probability (85.5%) that the All Blacks will qualify for the semifinals – there are no ‘ghosts’ from 1999 or 2007 lurking in these simulations!

New Zealand will likely play South Africa in the semifinal, and their probability of making the final is 63.5%. The All Blacks will probably have to beat England in the final and have a 47.1% chance of winning the tournament. Here are the knock-out matchups assuming that the team with the most rating points (including points for home advantage) always wins. 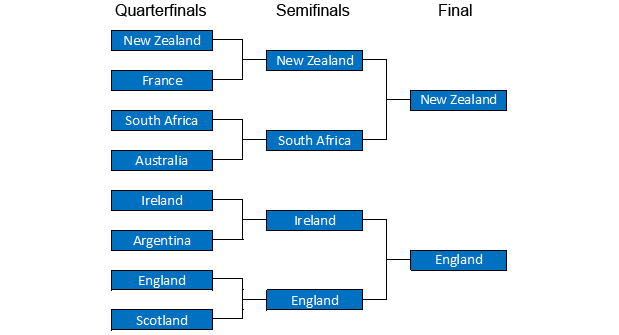 Rugby World Cup knock-out matchups assuming that the team with the most rating points (including home advantage) always wins.

Despite their recent loss to France in Paris, England is the next most likely team to win the tournament with a 21.8% chance of lifting the Webb Ellis Cup. Although England are seeded in the ‘pool of death’ and are fourth in our global rankings, if they win Pool A, they will likely avoid playing New Zealand or South Africa until the final. Additionally, when home advantage is added to England’s rating points, they are expected to, on average, beat all teams except New Zealand.

South Africa have the second highest probability of making the quarterfinals (behind New Zealand), but only have a 9.5% chance of winning the tournament. This is because, should they make the final, South Africa’s likely opponents in the knockout matches will be Australia, New Zealand and England (at Twickenham).

Of the teams that do not play in either the Rugby Championship or the Six Nations, Samoa is the most likely to progress past the pool stages, and has a 30.9% chance of  qualifying for the quarterfinals

So who will win the 2015 World Cup? New Zealand have a much higher probability of winning than any other team, but there is still more than a 50% chance that another team will be crowned champion.

Find the most recent Rugby World Cup probabilities and global rating points at www.rugbyvision.com. Join in the analysis and discussion of the World Cup predictions on our Facbook page and on Twitter by following @rugbyvision. Rugby Vision will also make live, minute-by-minute predictions for key World Cup games (see an example below). 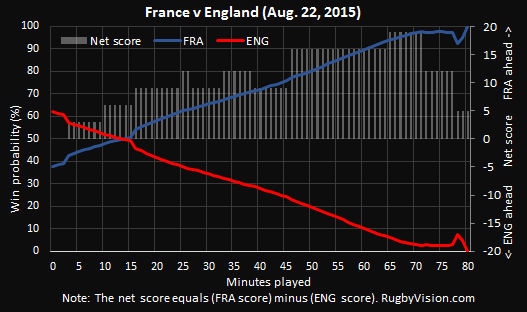