The stats in sport panel at RSS 2015: the bigger picture 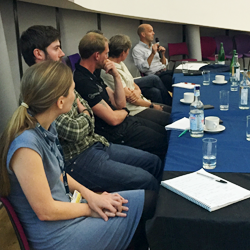 In the absence of huge amounts of money, gaining a competitive edge in sport requires creative innovation. As Moneyball most famously dramatised, statistics is one avenue that can deliver that edge. But different sports can have vastly different levels of noise to wade through before a signal is found. This question was the basis for a panel discussion at this year’s RSS Conference in Exeter. The panel consisted of a mix of sports coaches, academics and a statistician, who are all trying to discover an insight into sport through data, that would otherwise remain hidden.

Two of Exeter’s local sports clubs were represented on the panel by Paul Tisdale (manager of Exeter City Football Club) and Mark Twiggs (from Exeter Chiefs Rugby Union Club). Paul began by explaining how football is not an easy game to analyse statistically. The game is so fluid with decisions constantly being made by individuals throughout the match. He commented that the stats we hear quoted by pundits during televised games are in fact mostly useless to managers.

However, there are still key numbers that can influence his decisions as a manager. Paul is the second longest serving manager in the English game (after Arsene Wenger) and says the time afforded to him in the job has enabled him to use trial and error to find the right metrics to look out for.

Meanwhile in the world of rugby, Mark Twiggs is head of strength and conditioning with Exeter Chiefs and he explained how they use data in a different way. His job is to push the human performance of the 50 plus players on their books, and they do this by monitoring the physiological data on each player. The players are equipped with GPS and heartrate monitoring devices as they train and this compiles data on their positioning, acceleration, deceleration and physical performance. But Mark stressed that they only collect data if it’s useful, as they will eventually have to justify the level of insight gained to the club’s accountants.

The work that Mark does is also linked to the kind of research Sharon Dixon (senior lecturer in sports biomechanics) is doing at the University of Exeter. Exeter Chiefs have now partnered with the university to investigate what makes players more susceptible to injury. Sharon also described how technology (such as motion capture) is now making data collection easier to compile in how a player moves. This gives them extremely high quality data on the stresses and strains being put on athlete’s bodies as they train.

Chris Anderson, author of The Numbers Game: Why Everything You Know About Football is Wrong, then spoke about fallacies in football that he set out to investigate with his co-author. Chris is a social scientist who turned his quantitative skills from political elections to football a few years ago.

His book challenges some of the common misconceptions that football fans have about the game. One of his many eye opening examples described how fans often think corner kicks are vital to increasing a team’s chance of scoring, but there’s actually little evidence to back up their importance in the data. He went on to talk about how data can be used by a manger to ask the right question or qualify a gut feeling, but ultimately football has lots of data, but few ways in which to really apply it. While the top clubs are using statistics to inform how to improve tactics, outside of the Premier League this data isn’t being used because it's just not understood or communicated.

Paul Tisdale echoed this crucial point about looking at the right data. He described how players spend most of their time on a football pitch without the ball, so understanding the flow of the game and how players move without possession is often overlooked. Added to this difficulty is the fact that explaining a complicated statistical analysis to a player is useless, the player needs simple instructions on what their personal job is for the next 90 minutes. Like many other areas of life, the product of statistical analysis can be futile unless it’s properly communicated to those who are in a position to take action.

When asked about whether he uses data to decide on player transfers, Paul said that he has used this in the past to source players that will easily adapt to life at Exeter, an area that isn’t a natural draw for professional footballers. One method he used was to comb through the list of released players in football’s close season and pick out those who have a connection to the South West of England, who are the right ages and also who may have commanded a sizeable transfer fee in the past. Those attributes made them suitable to happily settling in Exeter and provide a platform for their careers to possibly flourish once again. Although a relatively simple method, Chris Anderson pointed out that with a strategy like this, Paul is thinking intuitively like a statistician.

The only fully fledged statistician on the panel was Grace Sterling from Atass Sports, an Exeter based company that forecasts sports results. She described the difficulties of working with sports data, which can be so fast paced with observations quickly piling up on each other. But unlike some other areas of statistics, the advantage in sport is that you can quickly see whether a model works or not, as soon as match day comes around and the final whistle blows. Yet she admitted that despite the amount of data we have, 50% of sport remains unquantifiable.

This was a recurring theme throughout the discussion. Technology means that vast amounts of data can now be generated by the events happing in sport. However, with the exceptions of baseball and cycling, effective statistical analysis remains an untapped potential in most sports. But when you have masses of data and a question, that’s when the statisticians step in with a clever way forward isn’t it?

Tim Paulden chaired this session at RSS 2015 and also provided the image above.