Running against the odds – The probabilities of the London Marathon ballot

Written by Anthony Hatswell on 06 October 2015. 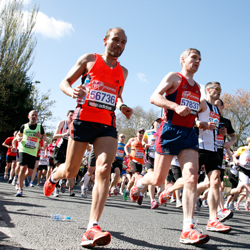 The late Chris Brasher, founder of the London Marathon, described the event as the ‘Suburban Everest’ - something everyone can aspire to do. Over the years, an increasing number of people have done just that. At the first London Marathon in 1981 there were 7,000 runners, in 2016 there will be 37,000 (and that ignores the growth in the sport due to new events around the country).

However, the demand for places vastly outstrips the supply. This year 17,000 places were made available to the general public, via a ballot. The exact system has changed as the event has grown in popularity, but the concept is similar every year. For the 2016 event, a staggering 247,069 people registered, with magazines going to successful applicants (around 7%) this week and next.

Number of places and number of entries for the public ballot of the London Marathon 2014-2016.

Due to the low odds of success, there are a large number of unlucky people who have been rejected multiple times. Someone applying for the past three years would have been given only a 31% chance of an entry within the period.

The London Marathon used to offer a system whereby after five years of rejections, a runner was guaranteed entry at the sixth attempt. This has now been scrapped, with the statistics making the case as to why. Had this remained in place (even assuming the numbers don’t continue to grow) a simple binomial distribution using the 2016 entries shows that 70% of people would fail to gain an entry in five attempts, so be eligible for an automatic place in 2021. If even a quarter persisted in applying, this would fill the entire race.

Other ways to enter

Whilst the ballot is the most popular way to gain entry, it isn’t the only way in to the marathon. As many of you will find out in the next six months when your colleagues pester you for sponsorship, about 15,000 places are offered to charity fundraisers. Charities are given (or purchase) these places, and pass them to those who commit to a certain level of fundraising (the NSPCC, 2016’s official charity, have a minimum target of £2,200).

Charity and ballot places make up the majority of the field, and most of the general public participation. In addition there are the elite runners (maybe 100, at most), and celebrity entrants (a similar number), as well as around 6,000 places reserved for runners who have completed a marathon in a particularly quick time for their age and gender. For those aged 18 to 40, the standards currently sit at 3:05 for men, and 3:45 for women, with (a little) more time allowed for older runners.

The best bet for entry

The London Marathon is now firmly the most popular event in the UK athletics calendar, and as a result, some places are reserved for the running clubs who make up the structure of UK Athletics. In exchange for their membership fees, hosting of events, and engagement of their members that keeps the sport alive, clubs are allocated approximately one place per 50 paid up members (the numbers do not scale linearly with club size). In total there are maybe a couple of thousand places.

In joining a running club, not only will you meet likeminded people (who can help you train and potentially qualify on merit), your odds over the next five years go from roughly 30% to 88%, due to the running club places (which I have also previously benefitted from when a member of ‘Steel City Striders’).

What this means for statisticians and the design of the event

The way entry in to this high profile event is allocated does link to many common themes within allocation systems. For example the definition of ‘fair’ – a lottery gives all an equal chance, but does still leave those unlucky enough to be serial losers. Assuming the current probability of ‘winning’ stays constant, there remains a 17% chance someone could enter for 25 consecutive years, and still never have a chance to run. Should some provision (or increased probability) be given to these people? In the case of the London marathon, organisers have relieved the pressure by creating alternate paths (for example charity fundraising).

A second issue is hinted at in the numbers, and likely relates to behind the scenes calculations - more places are available than there are people in the race – due to injury and other issues, many do not make the start line. How this is modelled will be critical in ensuring the race does not breach its capacity, yet doesn’t leave empty berths. Added to the change in rules surrounding five rejections, and it is clear that it's not just the outcomes of sports events or the performance of players that statistics are involved in, but the logistics of the event itself.

My advice as a statistician

If you are determined to run in London, my suggestion is to join a running club with its intrinsic benefits. As a by-product you will also greatly increase your chance of getting a place.

For those of you that share a love of running, I'll see some of you on the start line at London in 2016 (I qualify as one of the faster runners). And if you are in the unlucky majority, remember that there are many more great events across the country and they’re all the same distance.