Who will win the Rugby World Cup? The (semi) final reckoning

Written by Niven Winchester on 22 October 2015. 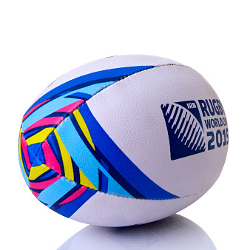 It’s the semi-final weekend in the Rugby World Cup (RWC), with South Africa, New Zealand, Argentina and Australia still in the running. While fans of England, Wales, Scotland or any of the other defeated nations will be feeling despondent, your correspondent remains upbeat. Through my website, rugbyvision.com, I’ve been forecasting match outcomes for the competition, and to date we have achieved an 84% success rate.

Rugbyvision.com uses an Elo-type system that was described in my previous Significance article, but to recap: teams are ranked using ratings points that are based on past performances, and differences in ratings points reflect the relative strength of teams. These rankings are used to predict score margins for upcoming games and to simulate remaining games while accounting for uncertainty in expected match outcomes.

Prior to the semi-finals of the RWC, the Rugby Vision system correctly predicted the winner in 37 of the 44 matches, and the average difference between the predicted score margin and the actual score margin was 12.1 points per game (see website for predictions for each game). This performance compares favourably with the prediction accuracy of bookmakers. The bookies’ favourite won 85% of matches, but the average error in their spread (also known as the line) was 13.3 points per game.

Rugby Vision also predicted seven out of the eight quarter-finalists correctly and projected the right quarter-final seedings for all teams except those in Pool A. For this pool, the system (incorrectly) predicted that England would top the group followed by Australia. For the quarter-finals, the system correctly selected the winner in the three of the four games – the model erroneously forecast Ireland to beat Argentina.

Rating points for teams that qualified for the semi-final are presented in the table below. Differences in rating points equal expected score margins in a game between two teams. For example, in the semi-final between New Zealand and South Africa, the All Blacks are expected to win by 7.4 (129.8 – 122.4) points, or 7 points when rounded to the nearest whole point. However, this prediction represents an average score around a distribution of possible outcomes, some of which involve a larger or smaller victory for the All Blacks, and some are associated with South Africa winning. According to the model, South Africa has a 28.9% chance of beating New Zealand.

Using our rating points and simulating the RWC while accounting for outcome uncertainty facilitates estimation of the probability of each semi-finalist reaching future milestones in the tournament, which are presented in the next table.

New Zealand is the most likely team to win the RWC with a 54.1% chance of retaining their global title. Despite being third in Rugby Vision’s global rankings, as they face the lowest-ranked semi-final opponent, Australia are second favourites and have a 24.9% chance of lifting the Webb Ellis Cup. South Africa will have to beat New Zealand and likely Australia to win the tournament, and we give them a 16.8% chance of doing so. Argentina have increased their global ranking more than any other team during the RWC and have a 4.2% chance of claiming their first title.

Who will win the RWC? New Zealand are the strongest team by some margin and have buried their ghosts from 2007, but there is still nearly a 50% chance that another team will be crowned champion.

Find the most recent RWC probabilities and global rating points at www.rugbyvision.com. Join in the analysis and discussion at www.facebook.com/rugbypredictions and on Twitter by following @rugbyvision. Following the RWC, Rugby Vision will make predictions for the Aviva Premiership, the Top 14, Super Rugby, and other major competitions.