Will England's rugby team redeem itself at the Six Nations Championship?

Written by Niven Winchester on 04 February 2016. 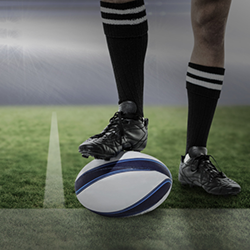 This weekend sees the start of the 2016 Six Nations Championship, in which rugby teams from England, France, Ireland, Italy, Scotland and Wales compete. For England fans, who saw their team crash-out unceremoniously in the group stages of last year’s Rugby World Cup (RWC), this latest contest offers the chance for redemption. And it would seem that they have cause to be hopeful.

Table 1 shows the estimated tournament outcome probabilities for the Six Nations. The probabilities are derived from Rugbyvision.com, which uses an Elo-type system. Teams are ranked using ratings points that are based on past performances, and differences in ratings points reflect the relative strength of teams. These rankings are used to predict score margins for upcoming games and to simulate remaining games while accounting for uncertainty in expected match outcomes. Rating points are updated after each game. If a team performs better than expected, rating points for that team increase and rating points for its opponent decrease.

According to this system, the Six Nations champion will likely be either England – who are the tournament favourites with a 37.7% chance of winning the competition – Ireland (29.7%) or Wales (23.4%). France, Scotland and Italy, combined, have less than a 10% chance of lifting the trophy and Italy has an 84.4% of claiming the wooden spoon – i.e., finishing last.

There is a 35.6% chance that one team will beat all others and achieve a Grand Slam, with England the most likely to do this. There is also a 58.8% chance that one of the home nations will win the Triple Crown – a trophy awarded to a British Isles team if it defeats all other teams from that region.

Advantage England… again?
A key reason why England is expected to do well in the Six Nations is that they play Ireland and Wales – their two strongest opponents in the competition – at Twickenham, which is their home ground. The Rugby Vision system recognises that playing at home is likely to give a team an advantage, and based on an analysis of international rugby games since 2002, it assigns a home advantage worth four points, which then feeds through into the calculations of predicted score margins. However, home advantage was also the reason why England – as RWC host nation – was pegged as second favourite to win the 2015 tournament. And we know how that turned out.

So, does England’s world cup failure mean there is no home advantage for international rugby games? Perhaps – but it can misleading to draw conclusions based on such a small sample of games (that is, England's four RWC group games). After all, a predicted score margin (which may include home advantage) is an average expected result around a distribution of possible outcomes, and one reason why sport is intriguing is that an underdog will sometimes upset a more fancied opponent.

To reach an objective conclusion, I estimate home advantage using results from RWC games played between 1987 and 2015. Out of the 329 RWC games played during that period, 83 involved a team playing on home soil – the proportion of home games is higher than in most global tournaments as New Zealand and Australia co-hosted the inaugural RWC and several nations typically host games in each RWC played in Europe.

Performance matters
As illustrated in Figure 1, estimated home advantage is similar if the calculations only consider RWC games played (a) in Europe, (b) since rugby became professional in 1996, or (c) between Tier 1 nations (nations that play in either the Six Nations Championship or The Rugby Championship). These results suggest that England’s early exit from the RWC was due to the team performing below expectations rather than an absence of home advantage. Of course, analyses that examine results from previous games will take some time to pick up changes in trends, so if the 2015 RWC was the start of a new regime with no home advantage it would not show up in the results reported above. However, the absence of home advantage would be unusual. Statistical studies have shown that home advantage exists in a wide range of sports and even in games between teams that share a stadium (due to more crowd support for the designated home team). As Sir Robert William ‘Bobby’ Robson once said: “Home advantage gives you an advantage.”