Written by Stephanie Kovalchik on 26 September 2011.

This week, as the six recipients of Nobel Prizes in science take the podium, some might wonder what the absence of women among the awardees says about the state of women in science. It will be a fitting occasion for such reflections as the Nobel ceremonies will coincide with the 99th anniversary of Marie Curie's award in chemistry. For her contributions to the theory of radioactivity and her studies on the therapeutic properties of radium, Curie became the first woman to be honored by the Nobel committee, which gave her the Prize in Physics in 1903, and the only woman to receive the honor twice. Her place in history is made more special by the fact that these accomplishments came at a time when few women were able to enter the scientific profession.

At present, great preoccupation exists about climate change effects in many areas. A standard methodology to study them is to look for significant statistical relations between the variable we are interested in and meteorological variables (most often temperature, but not only). Then, predictions given by global climate models under expected CO2 increase scenarios are introduced in the obtained model to infer the possible consequences of climate change. Such a path has been followed even to assess future changes in life satisfaction or violent conflicts, receiving full attention from politicians.

Written by Julian Champkin on 09 September 2011. 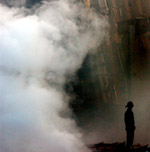 The tenth anniversary of the 9/11 attack on the World Trade Center is this Sunday. Its direct cost in human lives was 2,996. That is the number who died in the towers, in the Pentagon, as firefighters on the ground, and in the four planes that crashed. Its indirect cost in human lives was even greater. It sparked off the invasion of Afghanistan, where Coalition forces have suffered some 2613 military deaths. The number of Taliban deaths is unknown but has been estimated at around ten times that number. The number of civilian deaths is even less well documented, is astonishingly vague and uncertain, but certainly runs into many thousands.

Energy related world CO2 emissions reached a threateningly high historical maximum of 30,600 millions of tonnes in 2010, according to the International Energy Agency (IEA). Just consider that in order to limit global temperature increase to 2 ºC global energy-related emissions must not exceed 32,000 millions of tonnes in 2020. In consequence, in the next ten years emissions must increase at a five times lower rate than in the last ten years, which demands radical measures at all levels, from citizenship to governments and international organizations.

Butterflies and biodiversity: do something that counts

A couple of weeks ago I waxed happily sarcastic about the wartime National Census of Fruit, which happened in 1944. Beginning on Saturday there is another census, which everyone in the UK can join in on and which I shall not be sarcastic about at all. It is the National Census of Butterflies.envi
It is called the Big Butterfly Count. It was launched in 2010, when 10,000 people took part and counted 210,000 butterflies and day-flying moths across the nation. (A map of what sort of butterflies they found and where is here.) The organisers hope that many more people will join this year's big butterfly count, which runs all week, from 16th-31st July 2011.