Queen Victoria was on the throne, Abraham Lincoln was President of the United States of America and on this day 150 years ago the world's first underground railway transit system opened to the public in London. But neither Queen Victoria nor President Lincoln ever took a ride on it.
In 1863 the London Underground (55% of it is now actually above ground), or the Tube as it’s now commonly known, opened from Paddington in west London and stretched nearly four miles east to Farringdon in central London. That stretch of line is still in operation today, and the total stretch of track has been extended by a further 245 miles across London, mostly north of the River Thames where geology favours tunnel-building.

Written by Stephanie Kovalchik on 08 January 2013.

During one of their Brighton rendezvouses, after a round of oysters and a second bottle of champagne, Tom Haley asks Serena Frome the question every mathematician longs for her lover to utter: 'I want you to tell me something...something interesting, no, counterintuitive, paradoxical. You owe me a good maths story.'

Happy New Year. Especially (for a statistical site) because 2013 is, officially, the International Year of Statistics. More of that later in the week. For now we’ll do a bit of catching up of news that hit over the holidays.
The big story in the UK was Staffordshire Hospital and the Patient Survey. There were hundreds more deaths than expected at the hospital between 2005 and 2009. Some of those deaths were caused by some pretty dreadful failings at the hospital – see the box. To identify such failings earlier Health Secretary Jeremy Hunt has announced a Great Patient Survey.

Climate change and the assurance game: do we need a world government? 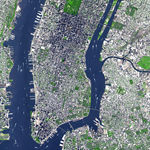 Residents of the Island of Manhattan in New York City are reminded that they live on a island and surrounded on one side by the Hudson River and the other by the East River when they cross a bridge or go through a tunnel to enter or leave it. Two weeks ago they were reminded starkly that they do indeed live on an island when Hurricane Sandy visited.

Written by Julian Champkin on 08 November 2012.

Last year we reported on the extinction of the Western Black Rhinoceros, and looked at the length of time that should elapse without a sighting before we can consider a species truly extinct not just hiding from us. Today we have happier news: a new species of mammal has been discovered - and it is a big one. Or to put it more accurately, the first complete specimens of it have been identified. The Spade-toothed Whale is the world's rarest whale species. (Probably; unless and until another new species, even rarer, is discovered.)