Applying "zones of influence" to social distancing in schools 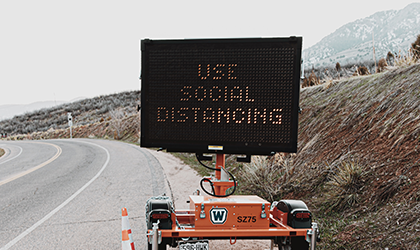 Social distancing is important in controlling the spread of Covid-19. This strategy has proven to be highly effective in flattening the curve of new cases/deaths. In this article I discuss the spatial implications of England's social distancing policy in relation to the school setting and, in particular, how this might apply to seating configurations in schools as the Covid-19 lockdown, implemented from 23 March 2020, is gradually eased.

The following discussion would also be relevant to spatial considerations for the design of open-plan offices and the placement of office workers’ desks.

Social distancing and the concept of “zones of influence”

For a social distancing policy with 2 metres as the specified distance, we can consider each zone of influence to have a radius equal to 1 metre, since this would imply no interaction when individuals are more than two metres apart and gradually increasing interaction as their separation is reduced below two metres. A radius of 1 metre does not have a direct interpretation; in particular, it does not imply that an individual can only spread the virus 1 metre in any direction.

The zone of influence1,2 can be thought of as the region within which an individual is able to exert an impact on another in a spatial context. This concept has traditionally been used in modelling the spatial locations of plants/animals: the zone of influence in the case of plants, for example, could reflect the impact an individual plant can have on the soil nutrients available to another neighbouring plant.

In this application, the value of the radius can also be considered to be a function of variables such as the density of the area (city centre, park, etc.) and the concentration of the virus particles.

Of course, immediate challenges would then be to determine:

Researchers (Yulia Parshina-Kottas et al. and Knvul Sheikh et al.) have indicated that the particles in a cough may travel further than 6 feet (which is approximately 2 metres); especially the smaller particles. In particular, they note that larger particles are quicker to fall to the ground while smaller particles can remain in the air and persist for a relatively longer period of time.

Using the concept of zones of influence and the variation of particle size in a given cough cloud, Figure 1 represents a simulated point pattern containing the location of 13 students (black dots) in the presence of a cough cloud. The darker yellow regions denote the area of overlap between each student’s zone of influence (discs around each point) with that of their nearest neighbours. The radius of each circle (zone of influence) is 1 metre; as a result any overlap between the zones of influence would by greater than zero only if the students are at least 2 metres apart. 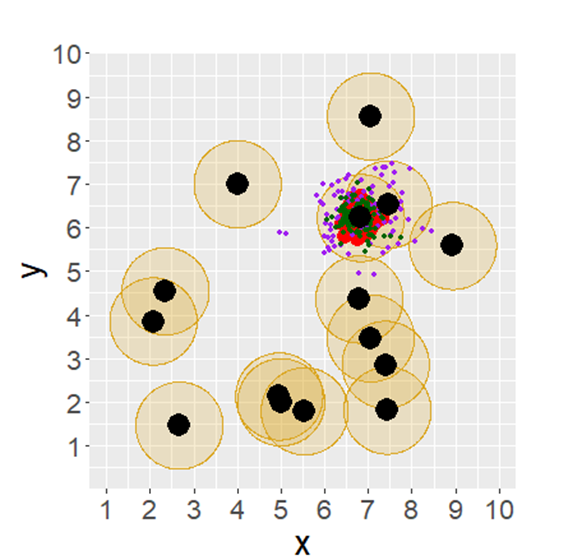 A hypothetical classroom of 25 split into two

Let us consider a hypothetical class of 25 students, originally in one classroom. After national advice to reduce class size, this class is now split into two, such that there are two resulting classes, each in separate rooms. For a given school with n classes undergoing such a transformation, there is a need to ensure that 2 × n rooms are available. Possibly, if necessary, the classes can be kept in the same original classroom, but the groups of students attend classes at different shifts – morning and afternoon.

The aim for the following simulations is to illustrate the change in the area of non-overlap of the zones of influence associated with different spatial arrangements of students within an enclosed room. The size of the classroom is arbitrary.

A cluster of 15 students

If these students maintain social distancing of 2 metres, the area of non-overlap between their zones of influence is most likely to be less than if they were instead spatially random. Note that for the simulation of spatially random points, I have used a Poisson point process model. Technical details on simulating point patterns can be found here. 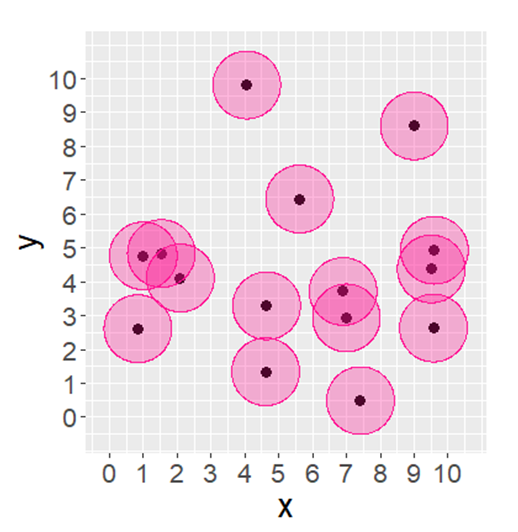 In Figure 2, the points represent 15 students who are randomly distributed within an enclosed room of 10 x 10 metres. Note that this represents just one instantiation of a random spatial pattern. Figure 3: Fifteen students distributed in a regular spatial configuration within an enclosed square of 10 × 10 metres. Each student is 2 metres away from each other. 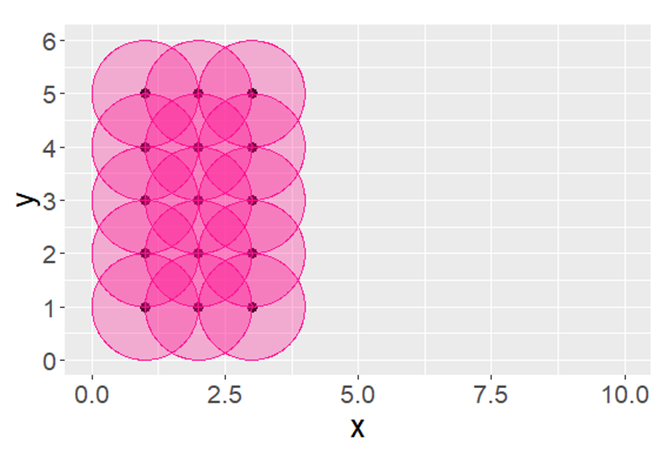 Figure 4: Fifteen students distributed in a regular spatial configuration within an enclosed square of 10 x 10 metres. Each student is 1 metre away from each other.

So, why should we examine what the spatial implications of social distancing would mean in classrooms?

Dr Glenna Nightingale is a research fellow (statistician) in the Scottish Collaboration for Public Health Research and Policy, School of Health in Social Science, The University of Edinburgh.