The many definitions of a Covid-19 death toll 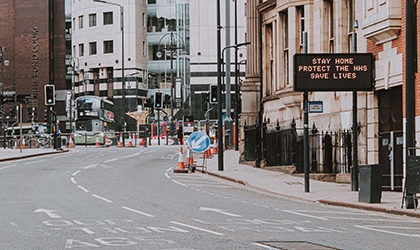 This note considers the different measures of the death toll in the UK due directly or indirectly to the Covid-19 epidemic. However, it ignores some important issues that contribute to differences between measures. For example, the official figures are published with differing frequencies and geographic coverage, there are conflicts between dates of death and dates of registration, and there are definitional and legal differences between the four countries of the UK. These are important but will make little difference in the final reckoning beyond 2020.

In the short term, the particular measure chosen to follow the progress of the epidemic does not matter that much, as the time trends in all of them are broadly the same. Policies are being pursued to get the numbers, however defined, on a downward trend.

But when the worst of the pandemic is behind us and the daily death toll is lower, the reviews and assessments will start, and the metrics chosen against which to judge policy will matter very much.

Three sets of figures are commonly referred to.

First is the figure that is updated and released daily (on gov.uk). It counts the deaths of people who have had a positive test result confirmed by a Public Health or NHS laboratory. It was 27,510 on 1 May (and 32,692 on 12 May). This is the measure that’s internationally compared in the charts we see every day. (It’s worth noting that the definition of this statistic changed on 29 April, as explained in the footnote.)

Second is the weekly, more comprehensive data from the Office for National Statistics (ONS), released each Tuesday. The data up to week 18, covering the period to 1 May, was published on 12 May. It recorded 36,591 registered UK deaths that mentioned Covid-19 on the death certificate. The “mentioned” is important as a good number of people recorded in this way had not been tested for the virus, unlike those counted in the daily deaths figure. The ONS number will therefore be higher than the first measure, mainly because it will include some or most of the Covid-linked deaths, notably those in care homes, at home and in other settings, missed by the NHS/Public Health testing.

Third is a measure of excess deaths. This is derived from the weekly ONS release, and Scottish and Northern Ireland releases, by taking total deaths in the week and subtracting the average number of deaths in that same week in the last five years. Excess deaths since mid-March, when the first UK Covid deaths were registered, was showing 50,745 up to 1 May.

So, if you want a count of UK Covid-19 deaths as of 1 May, there is the option of three numbers published at least weekly: 27,510, or 36,591 or 50,745. Oddly, none of these is likely to be the measure preferred by the ONS, or be the best one for writing the history of Covid-19 and answering the question of how many people were killed by the virus.

Death certificates are the gold standard source of death data. They are used to classify a death to an "underlying" cause, using a long-standing internationally agreed practice. As this takes time, the figures are published later, a month at a time. The March figures, published mid-April, pointed to approaching 3,400 "underlying" Covid-19 deaths, a number that will have risen, possibly to around 30,000-40,000, by the end of April. In any normal situation, these would be the numbers to watch. It is the measure that is widely used to derive estimates of deaths from cancer, heart attack and so forth. But as the data do not come quickly enough or frequently enough for the media (or policy makers with their 5pm daily announcements) they are not much referred to right now.

There is also one much lower figure to watch that appears in the same monthly release, namely the number of people who died from Covid-19 who had no other serious medical condition. As is now clear, the old, frail and ill are very much more vulnerable to Covid-19 than others. Around 4,000-5,000 is reasonable guess of what the end of April number will be of Covid-19 deaths of people with no other serious pre-existing condition.

The ONS has promised to conduct research in the coming weeks and months, including into the death certificates, to derive a more accurate estimate of underlying Covid-19 deaths. The rapid appearance of the virus will have created an uncertainty in the minds of those signing forms, leading to some deaths being classified as due to Covid-19 when they weren’t, and vice versa. So, expect developments.

All of the measures described above have some merit. Once the peak has passed and daily updates are less pressing, we can expect the daily figure to be less prominent. It’s the least robust due to its coverage. But we can expect a longer-term battle for supremacy between the other measures.

The excess deaths measure will have full legitimacy once we get to the end of the year and a decent methodology can be established. It needs to allow for the methodology already adopted by ONS for assessing winter deaths and various other factors, including eventually adding in splits by age, sex and so forth. Deaths were lower than average in January and February and the virus will have taken some who survived through the winter due to mild weather and the absence of a serious flu. It will also have taken early some who might normally have died later this year. The excess deaths measure will need to look not only at the weeks of considerable excess that we are seeing now, but also the weeks before the peak and those after where we might expect fewer non-Covid-19 deaths.

The England figures used only to include deaths of positive-tested patients in “NHS-commissioned services” and was running at about 3,000 lower at the time of the change, which is explained on the "About the data" part of the web page, coronavirus.data.gov.uk. The data on the old basis, up to the time of change, is also published on that page. The definition of the data on the new and old basis is clear (and reasonable) but its subtlety hints at the many definitions of death counts that could be possible, including one feature or excluding another. It says: “The data do not include deaths of people who had Covid-19 but had not been tested, people who were tested positive only via a non-NHS or Public Health laboratory, or people who had been tested negative and subsequently caught the virus and died. Deaths of people who have tested positively for Covid-19 could in some cases be due to a different cause.”

Simon Briscoe is a consultant on statistics and economics, and a member of the Council of the Royal Statistical Society (RSS) and the RSS Covid-19 Task Force.