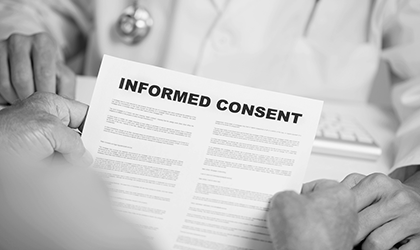 In the June 2020 issue of Significance, we tell the story of medical researchers in the late nineteenth century, some of whom went to extreme lengths to identify the transmission mechanism of yellow fever, a killer disease. In our article, we write that: "The experiments run by the Yellow Fever Board" - the group of scientists established in 1900 to investigate the cause of the disease - "were in many ways the functional equivalent of clinical trials", but that compared to contemporary clinical trials, "the design of the experiments, particularly the early ones, was crude". However, with respect to informed consent, their practices were, by the standards of the time, quite advanced, as we will explain here.

One of the main aspects of clinical trials today is informed consent; that is, subjects who volunteer for a clinical trial must be informed of the risks and consent to the treatment. Most clinical trials today also involve randomization and blinding. Here blinding means that the subject (and usually the treating physician in a double-blind study) does not know which treatment the patient receives. While blinding was not used in the Yellow Fever Board’s experiments, written consent was. At the time, consent was a revolutionary idea. Susan Lederer wrote that the consent used by the Yellow Fever Board “marked a significant departure in the history of human experimentation”.1 As described by Enrique Chaves-Carballo,

Brigadier General Leonard Wood, Governor-General of Cuba, supported the yellow fever human experiments but was explicit in the protection of human beings. Although he made available $10,000 to be used to reward volunteers, he prohibited the enrollment of enlisted soldiers and directed Reed to devise a written consent form. Nine days before he created the Yellow Fever Board, General Sternberg admonished Agramonte that he must first obtain the volunteer’s ‘full knowledge and consent’ before carrying such tests in humans. Major Reed was sufficiently concerned with the ethics of human experimentation to devise the first known modern written informed consent form. This ‘contract’ was typewritten both in English and in Spanish and signed by the experimental subjects, mostly nonenlisted American soldiers and Spanish immigrants.2

An example of the informed consent form used can be seen here. It reads in part,

The undersigned understands perfectly well that in the case of the development of yellow fever in him, that endangers his life to a certain extent but it being entirely impossible for him to avoid the infection during his stay in this island, he prefers to take the chance of contracting it intentionally in the belief that he will receive from the said Commission the greatest care and the most skillful medical service.

Motivations for volunteering varied, however. To some, the payment of $100 plus an additional $100 if he contracted yellow fever was sufficient inducement. (One hundred dollars in 1900 is worth approximately $2,600 today.) For others, the motives were more altruistic, “solely in the interest of humanity and the cause of science”. Some American soldiers refused to accept payment for their participation. Others were totally ignorant of the risk of getting yellow fever. For yet others, there was a certain amount of fatalism; they believed that moving to a place like Cuba would naturally put them at high risk for yellow fever. Catching it once, would render them immune for life, and if they were going to get it, they might as well have it under the best medical care available. For example, one American volunteer, John Bullard, said:

Volunteering to Dr. Carroll for experimental yellow fever was, I can assure you, a cold-blooded business proposition. There were no heroics in it as far as I was concerned. . . I suspected that I would probably get it spontaneously anyhow, so I decided I’d rather have it under favorable circumstances.3