Nightingale and the coronavirus pandemic: disease prevention, parallels and principles 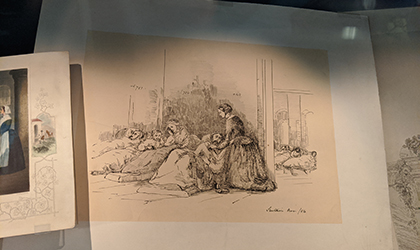 Florence Nightingale (1820–1910) was an early and persistent advocate of the best means to prevent the spread of infectious diseases – frequent handwashing – calling for it in her 1860 Notes on Nursing and adding details on the use of disinfectants in later writing. She was a pioneer of evidence-based health care, from the lessons learned from the high mortality rates of the Crimean War (1854–56). NHS England, in giving the name “Nightingale Hospital” to seven temporary hospitals for Covid-19 patients, is recognizing Nightingale’s relevance to combatting infectious diseases.

Note the parallels between the challenges she faced and the current pandemic:

One other parallel from then to now: London’s NHS Nightingale Hospital was officially opened by Prince Charles, “attending” remotely from his residence at Birk Hall, on the Balmoral estate in Scotland. Nightingale herself stayed at Birk Hall in 1856, when it was the home of Queen Victoria’s physician, Sir James Clark, a Nightingale ally. The Queen, Prince Albert and Nightingale together, at Balmoral, pressed Lord Panmure, the Secretary of State for War, for a study to be done of what went wrong in the Crimean War hospitals, where high death rates were common. This became Nightingale’s 853-page Notes on Matters Affecting the Health, Efficiency and Hospital Administration of the British Army, published in 1858.

In preparing this analysis, Nightingale and her team of experts learned the lessons of the Crimean War and went on to press, successfully, for higher standards in ventilation, cleanliness and clean water (through improved sewers and drains) in hospitals, barracks, towns and rural areas. The new standards worked: death rates declined.

Evidence of this success can be seen in the declines in the number of hospital beds the British Army needed. The vast army hospital that was built after the war, at Netley on the south coast of England, was over-built, its number of beds based on the usual pre-Crimea percentage. That hospital was not filled to capacity until the Boer War of 1899–1902, more than 30 years after it opened. Nightingale joked to her MP brother-in-law, Sir Harry Verney: “Really, it is not our fault if the number of sick has fallen so much that they can’t fill their hospitals.”

Nightingale was not only an expert herself in analysing statistical data, she could call on leading experts in public health (Dr John Sutherland), medical statistics (Dr William Farr), civil engineering (Robert Rawlinson) and military engineering (Douglas Galton). She typically sent her results to one or more of them, asking for a critique before publishing – this in the time before peer review. She could ask the right questions and bring in the most appropriate data to answer them, including cross-sectional comparisons (making the most relevant comparisons) and longitudinal data (to see what changes after causal factors are altered).

After the Crimean War, and learning its lessons, Nightingale began to call for systematic improvements in data collection, both for the military and general population. Then, as now, epidemics have to be identified and tracked without delay. Good weekly data on disease and death has to be produced, to become daily data as an epidemic appears.

Will the lessons of this coronavirus pandemic be learned? It happens that different countries/states have adopted different measures of prevention, from thorough lockdown to mere voluntary social distancing. The amount of testing done has also varied enormously, from substantial numbers to only the very worst cases. Thus, like it or not, the elements of an experiment are in place. We will soon see who achieves the best results, in terms of the lowest number of deaths per population.

This coronavirus pandemic is likely to carry on for some time, and/or return in later waves. We need medical experts to find an effective vaccine and methods of treatment. As well, especially while waiting for such developments, we need Nightingale-type research to assess the success (or not) of the various measures used to limit that spread.

Lynn McDonald is professor emerita at the University of Guelph, Ontario, and editor of the Collected Works of Florence Nightingale, a 16-volume, peerreviewed edition of Nightingale’s books, articles, notes and correspondence, assembled from 200-plus archives worldwide. McDonald completed her doctorate at the London School of Economics, is a Member of the Order of Canada, has an honorary doctorate and is a Fellow of the Royal Historical Society.

Read more about Florence Nightingale and her statistical work in our April 2020 special issue, which celebrates the bicentenary of Nightingale's birth. All content in this special issue is free to read online until the end of May 2020.