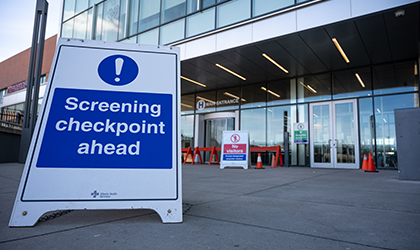 I’m writing this article from the country with more confirmed Covid-19 cases than any other – the US. At the time of finishing my first draft (Monday, 6 April 2020) there were 336,830 confirmed cases. Almost no one, however, believes that this number reflects the true number of Covid-19 cases. Due to the US’s limited testing capacity, we suspect there are cases that have escaped the attention of authorities.

Using Covid-19 as an example, we can express these concepts through notation:

We also use the symbol “|” to mean “given that” or “conditional on”.

Now, the main problems with any diagnostic test are false positives and false negatives. The former occurs when someone without the disease tests positive for it; the latter occurs when someone with the disease tests negative. To see how the quality of a Covid-19 test depends on the magnitude of the outbreak, we need to consider a well-known rule from probability theory called Bayes’ theorem.

This takes the form:

In this equation, P(A ) is sometimes called the base rate. The conditional probability P(A | B ) is what we want to find out. Regarding Covid-19, P(A | B ) becomes P(Cov | Pos ). That is, we want to know the probability that a person has Covid-19 given that they have tested positive for it.

First, note that the initial expression on the top right side of the equation is the sensitivity of the test. Suppose, for illustrative purposes, we have a test with a sensitivity of 99%. That would mean that 99% of those who have Covid-19 would test positive for it. We write 99% as 0.99 when expressed as a probability.

Next, we have the base rate of Covid-19, P(Cov ) – the estimated prevalence of the disease, which is derived from the number of Covid-19 cases in the US divided by the total US population. At the time of writing (6 April), all we know about the prevalence of Covid-19 is that the US has 336,830 confirmed cases which, when divided by a population of about 329.4 million, gives a P(Cov ) value of 0.1% (0.001). If this were the true population prevalence, it would mean that about 99.9% (0.999) of US residents don’t have the disease, and this gives us our P(NoCov ) value.

One final component: suppose that 1% (0.01) of those who don’t have the disease test positive for it – these constitute our false positives, P(Pos | NoCov ).

We can now fill in Bayes’ theorem:

Now, let’s consider what would happen to our calculation if the number of confirmed Covid-19 cases was underestimated by a factor of 10, as suggested by Dr Dean Blumberg of UC Davis Children’s Hospital, and that instead of 336,830 cases there are really 3,368,300. Our base rate would then increase to about 1% (0.01), and the probably of someone not being infected would decrease to about 99% (0.99). Bayes’ theorem would then yield something like this:

Now our hypothetical probability that someone has Covid-19 given that they test positive for it is about 50%.

And what if we assume that the current estimate of Covid-19 prevalence is off by a factor of 100? This would mean that about 33,683,000 people in the US currently have the disease, bringing prevalence up to about 10% (0.1) and the probability of someone not having the disease down to about 90% (0.9). In this hypothetical scenario, the probability that someone has Covid-19 given that they test positive is about 92%.

In the midst of a deadly global pandemic, this may be as it should be. Making sure those we believe are negative really are negative may be far more important than making sure those we think are positive really are positive. But we shouldn’t forget that telling people they are positive for a disease when they aren’t comes with a cost. It isn’t just the possibility of being unnecessarily quarantined. It’s also the anxiety of thinking one might have a disease which appears to kill around 1–2% of those who contract it.

Michael Anthony Lewis is professor in the Silberman School of Social Work at Hunter College, City University of New York. He is also the author of Social Workers Count, published by Oxford University Press.