What to make of the coronavirus "mortality rate"? Communicating risk effectively 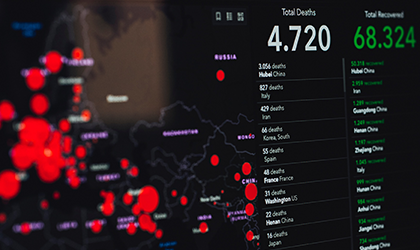 Language is powerful, and how we use it subconsciously shapes our assumptions. Throughout this coronavirus epidemic, the public has been inundated with reports about the virus’s “mortality rate”. The use of this phrase portrays the rate as if it were a real property of the virus itself, embedded in its DNA (or RNA); that somehow it has been programmed to kill X out of every Y people it infects.

According to the World Health Organization situational report (4 April 2020), 1 out of 824 confirmed cases died in New Zealand, compared to 1,158 out of 85,778 in Germany, and 14,681 out of 119,827 in Italy. What is reported as the "mortality rate" is simply the number of coronavirus deaths (the numerator) divided by the number of coronavirus cases (the denominator).1 This translates to morality rates of 0.1% in New Zealand, 1.4% in Germany and 12.3% in Italy – a variation of 100-fold between the highest and lowest. Such variation can cause confusion and requires explanation.

The question regarding what the “mortality rate” means is an ontological question. Many would argue that such questions are pointless, and lead to mere philosophical speculation. To the contrary, I would say that as soon as an idea such as “morality rate” is accepted and utilised in a discourse, everyone must take a position about what it really represents, whether they consciously declare it or not. The way we use this phrase in our discussions also implies certain ontological positions. Therefore, to speak of the coronavirus “mortality rate” is to take an ontological stance.

There is no doubt that coronavirus has caused tens of thousands of deaths. However, to what extent are these deaths attributed directly to the virus itself is unclear. Other factors play a role. The strength of the health system, other diseases a person may have, the general overall health of people, the weather, perhaps genetics. It is impossible to separate the virus from its context. What is widely reported as the coronavirus mortality rate is not the mortality rate of the virus at all, but a combination of the virus’s lethality with a host of other social and personal determinants of health. This fact cannot be ignored and goes part of the way of explaining the variability in the reported mortality rates.

On the other hand, even when taking account of all these modifiers, we see that coronavirus has a far lower mortality rate than Ebola, for instance. So there is some credence to speaking about different viruses having varying mortality rates. One way to interpret these variations may be that viruses with a high mortality rate are those that we as a collective have little defence against, whether naturally or artificially (i.e. with medical interventions). Taken from this perspective, we may interpret what is typically reported as mortality rate as an aggregate measure of society’s ability to resist a virus, rather than a measure of its lethality. In other words, it is no longer a property of the disease, but a property of the collective. This makes sense, for instance, when we hear about remote communities being devastated by communicable diseases they have never been exposed to previously, whereas in other communities it may be only a mild disease.

Looking at reported mortality rates through this lens helps make sense of the variability that is apparent. If the mortality rate was a property of the disease alone, we would expect it to be relatively constant. The fact it changes dramatically between communities and varies over time can at least be partly explained by the ability of different societies to resist the virus, and how this capacity changes over time.

There is, however, another major factor that contributes significantly to the reported variability in mortality rates. This comes down to the epistemic question: that is, how do we gain knowledge about the mortality rate? Or to put it in practical terms, how do we measure it accurately? The unreliability of existing data has been the subject of criticism from a number of quarters, including the leading epidemiologist John Ioannidis. The issue is that while the mortality rate is a simple calculation, collecting the data is far from simple. While there is scope for there to be deaths misattributed to coronavirus, this is likely to influence the mortality rate comparatively little. Cases serious enough to cause death are likely to come to the attention of authorities, and while misattribution of deaths is possible, it is unlikely to modify the rate many-fold. On the other hand, we are certain that the number of reported cases is an underestimate, and it is entirely possible that it is off by orders of magnitude. If we are 10 times off – which is not unreasonable to assume – a mortality rate of 3% would reduce to 0.3%. If we are 100 times off, it would be only 0.003%.

Cases of Covid-19 that come to the attention of authorities are identified through patients self-reporting (i.e. presenting themselves to the health system), contact tracing (where contacts of people known to be infected are identified), and mass screening. Self-reporting and contact tracing will not identify every person that has coronavirus. It is well known that coronavirus can produce only mild symptoms in many people and no symptoms in others, and these people may never be found by these means. Mass screening would be the most accurate way to get a denominator, but this has not been widely utilised by governments. The number of cases reported depends on how much effort and how many resources governments are willing to exert to actively identify new cases. Reported jumps in new cases don’t only mean more cases exist but could also simply reflect a more comprehensive search. In addition, deaths occurring now are due to infections a week or two previously and so using the current number of cases identified as the denominator during an evolving outbreak can be misleading. This is especially so in the case of viruses that can spread rapidly. Given how fickle the denominator is to collection methods, it is likely to vary dramatically between countries, contributing to the highly variable rates.

One solution may be to simply report the number of deaths from coronavirus without giving a denominator. However, count data alone fails to give sufficient perspective. To provide perspective we could compare deaths from coronavirus with other communicable diseases currently circulating, and keep a running tally. This tally could also be presented in a time series to provide a sense of how death trends evolve. Or, alternatively, deaths could be compared with historical data. For instance, according to the Australian Bureau of Statistics, 1,255 Australians died from influenza in 2017. By comparison, 28 people had died from coronavirus in Australia as of 4 April. The number of deaths from coronavirus would have to increase 45 fold to be comparable. This is not to undermine the dangers of coronavirus, but rather to show different ways we can try to get a handle on what the numbers being reported mean. Indeed, other factors would also need to be considered, such as the potential size of the population yet to be infected. Comparing figures from an influenza season where the virus has exhausted its spread to an outbreak still in progress is problematic in its own right.

Trying to reduce a complex phenomenon to a set of numbers is challenging, as numbers fail to capture the complex contexts from which they emerge. However we choose to communicate risk, there will be challenges and so reporting must be done carefully and responsibly. There is immense scope for misunderstanding coronavirus mortality rates, and until we can get a firm grip on a denominator, it is unclear whether it is wise to continue using it. It is also necessary to tailor the language used to accurately communicate what various summary statistics are in fact measuring.

Dr Narcyz Ghinea is a mathematically trained health policy analyst and bioethicist who is interested in how evidence and values are used to make difficult decisions under uncertainty. He has worked with surgeons to develop probabilistic decision support systems, implemented quality improvement projects in hospitals, and worked for peak government healthcare agencies responsible for developing policies and quality improvement projects. Currently, Dr Ghinea is a research fellow at Sydney Health Ethics, School of Public Health at the University of Sydney and helps co-ordinate the master’s unit on Medicines Policy, Economics and Ethics.

On 15 April, we added a footnote to clarify use of the term "mortality rate".