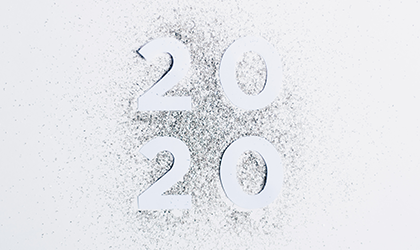 Let me tell you something: 2020 is a magic year. But what do I mean by that? To explain, grab a calculator and follow these instructions.

Here's why this works

It would be possible to devise procedures for other years, but they would inevitably be more complicated. The advantage of this trick is that even the most innumerate helper would be able to copy the two digits which they have just entered into a calculator.

If 10X +Y is a prime, as for 1919 and 2323, then the trick would not be particularly effective as there could be only one multiplier, and as it would be the first half of the year it would rather give the game away.

The trick would work well in 2828 as the words “magical year” could be used. But it is unlikely that anyone reading this would be around to use it.

2020 is a self-descriptive number

As an example, Martin Gardner used the idea as a puzzle in Mathematical Circus (page 128) where he asks for a 10-digit number to be written in the 10 cells (below) such that the digit in each cell gives the frequency of the digit above the cell.

Alan Jackson retired in 2018 and for the previous 27 years was a statistician with the Welsh Government. Before that he worked in the Operational Research Department of British Steel, taught mathematics in a girls’ school, and throughout the 1980s researched in artificial intelligence for Ferranti Computer Systems, at which time he was also Visiting Research Fellow in the Robotics Department of Bristol University. Jackson is an experienced magician and has done mathematical work for a number of well-known magicians, including Derren Brown. The first part of his car registration number is pi.