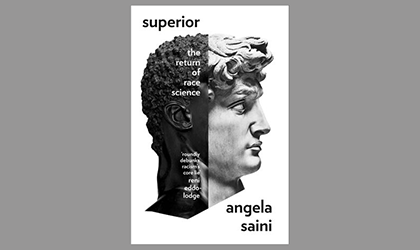 “The key to understanding the meaning of race is understanding power,” writes Angela D. Saini. Her new book, Superior, explores the roots of “race science” in the modern world. Though it mines human pre-history, it hinges around the major ideological warfare of the 20th century – a time when racial experiments within science were enthusiastically supported in Nazi Germany in its pursuit of policies of “racial hygiene”.

These policies were inspired by the eugenics movement of the 19th and early 20th century, which included statisticians such as Sir Frances Galton, as well as scientists and thinkers from other disciplines, who were convinced that humanity could be improved through selective breeding.

Saini’s primary focus is on the ways by which eugenics, and other approaches to race in science, have offered scientific cover to racism. Wherever there were thought to be biological pre-determinates of “bad” or curious outcomes – such as criminal behaviour – dragons lay. In the 19th century, the nature of inheritance was uncertain, and the theories and arguments between scientists on this subject were inherently political. For example, the biologist Alfred Russel Wallace argued furiously in 1912 that, “The world does not want the eugenicist to set it straight”, in an interview in which he also argued for the non-selective schooling of all children. Such arguments were prescient, but it was some time until genetic science progressed sufficiently far to, in and of itself, debunk some of the racist tropes within its own disciplines. Saini credits the decline of eugenics more to advances in the observation of our population-level genetics and of how inheritance worked, than to any persuasion against social engineering.

The book offers many compelling reasons why combatting racism is a project scientists should care for. As Saini patiently explains, this is in part because we do care a lot about race, for good or ill. In her interviews and research, Saini draws out why it therefore continues to be important to explain what race is. Science’s case for considering race is, most usually, that differences on average exist between people of different socio-economic and ethnic categories in view of the conditions in which they live. Scientific debate about this persuades against racist dogma in some cases. In the early 20th century, Raphael Weldon, a professor with an interest in applying statistics to biology, began campaigning for scientists to recognise the importance of environmental as well as genetic backgrounds when thinking about inheritance. Arguments such as these are credited in the book as having marginalised eugenic policies in the UK at a time when the US was using eugenics to justify forced sterilisations.

The most compelling reasons for continuing to discuss and combat racism in science are that the lessons continue to this day. Biological determinism can come in under the guise of understanding individual health outcomes, or group inequality. There are unintended dog-whistles to racists in how science has been pursued. For example, Saini questions the wisdom nowadays of developing medicines that may be tested on, and marketed to, black Americans alone. This, she says, has only taken place because it is more affordable to test and market a drug’s effectiveness to part of the population (however nonsensical the category may be) than to prove its worth for the whole population. Saini finds that the many practitioners administering this tend to think that some drugs just work better on black people, which was never the case. They are unwitting victims of a crude correlation.

Saini’s book owns that much of “race science” is also due to the lure of superiority, which we can hope to give less ammunition to. “Scientific racists,” she concludes, scathingly, “appear to believe that with enough data, with enough human guinea pigs, with enough science, they could take race – this arbitrary, imaginary set of categories invented by the powerful to control the weak – and somehow make it real.” Saini is clear that the pursuit of race in this way is fatally flawed, and that the political drivers of scientific work must be reckoned with.

I found her book an important read, compelling and also prescient about the implications for new scientific innovations. The consequences of differentiating between people, race by race, is one of the major questions that could still be asked about statistical models, machine learning and AI tools, in which systems of data categorisation, labelling, analysis, and storage are so readily applied. We should understand this because, through history – and in Saini’s telling of it –there is a continual need to reckon with racist tropes. Concern for the victims of a “central lie” has too rarely won the day.

In our June magazine, out now, we consider the legacy of Francis Galton, statistical pioneer and eugenicist. How should we best commemorate Galton's statistical achievements while not downplaying or overlooking his disturbing views on race? Subscribe now to read the issue in full.