Written by Christoforos Anagnostopoulos and Spiros Doxiadis on 20 March 2019. Posted in Science 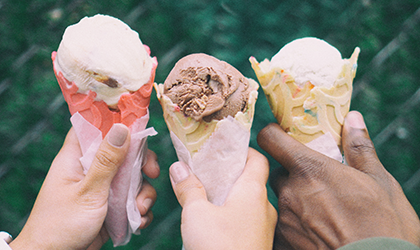 The saying goes that “probabilities are counter-intuitive”. A simple problem might appear to have a straightforward answer at first glance, but only do we later learn, through careful explanation, that our intuition has been subverted. Indeed, human intuition is rarely to be trusted when it comes to making probabilistic judgments, especially under time pressure. Even those trained in statistics, like most readers of Significance, can fall prey to cognitive biases when making snap decisions.

But probabilities do not only manifest as paradoxes. Sometimes we can be intuitively right about a problem presented to us, albeit for the wrong reasons, or for reasons that are hard to comprehend. And sometimes we are faced with probabilistic problems for which intuition abandons us altogether.

Thus, this column sets out to put you – the reader – to the test. Each time we present a question to challenge your probabilistic instinct, along with the answer and some commentary and explanation.

The problem
In the village of Chedrok, there are two ice cream sellers, Dimitrius and Zaza. Dimitrius is a hard worker. He sets up his counter every day early in the afternoon and doesn’t stop until early next morning. He serves around 220 customers per day. Zaza is more laid back. He works only a few hours in the evening and rarely at night. He serves around 45 customers per day.

Sourcing ice cream is tough in this area, so they only sell one scoop to each customer and they've both settled for just two flavors, ginger and raspberry, which are the locals’ favourites. Overall, about 50% of the customers choose raspberry. However, the exact percentage varies from day to day. Sometimes it’s higher than 50%, sometimes lower.

Dimitrius and Zaza have had a small wager going on between them. For a period of three months, each recorded the days on which more than 60% of his customers chose ginger. We’ll call such a day a "ginger day".

Who do you think recorded more ginger days?

Read the description again and give yourself just a minute to decide on an answer.

It is usual for respondents to jump to (c): any discrepancies between the number of ginger days for Zaza and Dimitrius should be small – after all, both sellers are catering to the same audience with the same taste distribution. So, any difference should be limited to small random fluctuations. Easy.

Except, it is not so easy. To help guide your intuition, let's make the question a little more extreme. Imagine that Dimitrius was actually an ice cream conglomerate, serving an astonishing 1 million customers a day. It would be pretty strongly against the odds for Dimitrius to see more than 60% of his customers pick ginger on any given day, given an equal taste distribution. Put conversely, if he did observe such an eventuality, he would probably conclude that the taste distribution had shifted, given how unlikely the alternative would seem. Contrast with Zaza, whose business, in this imaginary scenario, is in such disarray that he only serves four customers a day. It seems clear that random variation would have a strong effect here, and ginger days (and raspberry days, too) would appear often enough.

The underlying phenomenon is in fact widely known: as the sample size increases, the observed frequency of an event approximates its true mean. Departures from the mean are hence much more likely for small sample sizes. But, even if you are among those who chose correctly, you might yet be surprised at the speed of this convergence. In the original question above, about 1 in 9 days is expected to be a ginger day for Zaza, pitted against a rare 1 in 550 days for Dimitrius. Not only is (b) more likely, it is extraordinarily more likely.

Now, let’s imagine that we offer you a bet: we'll pay you £100 if Zaza has more ginger days in three months than Dimitrius, but you must pay us £100,000 if not. Would you take that bet? You stand to lose a lot for very little gain, but the probability you’ll win is 0.9999417. Even with the 5% tolerance given in the question, it is nearly certain that Zaza will have more ginger days than Dimitrius. The reason for these stunning odds is that, yet again, the law of large numbers kicks in, and the higher chance of a ginger day for Zaza compounds over 90 days, forcing the average number of ginger days to approach their theoretical expected values: about 10 for Zaza, and effectively 0 for Dimitrius. You should have taken that bet.

There is a name in the literature for this particular cognitive bias: "insensitivity to sample size". What is fairly surprising, but also reassuring, is that most people will readily doubt the accuracy of a statistic relying on a very small sample size, and at the extreme, might discard it altogether as anecdotal if it is based only on one or two examples. Nevertheless, most people still get the Zaza-Dimitrius wager wrong: they expect two averages coming from differently sized samples from the same population to vary much less than they do in reality.

But uncertainty is variation. Two sides of the same coin.

See you next time.

Christoforos Anagnostopoulos, honorary staff at Imperial College, and Spiros Doxiadis, an entrepreneur and amateur probabilist, together created the board game Borel. The game uses probabilistic quizzes and instruments of chance – such as multi-sided dice and pouches with colored balls – to challenge players’ probabilistic judgement.