A spoonful of sugar helps 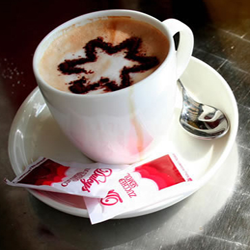 Every day beverages containing caffeine and glucose keep us company from morning to night: a caffè latte during breakfast, soft drinks at lunch or during breaks, energy drinks at work or alcohol energy drinks late in the night. Keeping us awaken, boosting our energy, or just the pleasure of it are some of the reasons for consuming these drinks. But what are the effects of these substances in the functioning of our brain? Are the effects attributed to them true or are they just a myth?

Many studies have dealt with the effects of glucose and caffeine in the nervous system. Glucose is a sugar that represents the main source of energy for the cells. It is essential for the normal functioning of the central nervous system and according to research results glucose can improve memory and learning processes.

Caffeine, instead, is an alkaloid present in coffee, tea, chocolate and guarana. Its effects on human behaviour and cognition include increasing alertness and reducing fatigue, decreasing reaction time, or enhancing performance in sustained attention tasks and in motor tasks such as handwriting or driving. The combined effects of caffeine and alcohol remain a controversial question and there are few studies on the combined effects of caffeine and glucose on memory and attention.

A recent paper (Serra-Grabulosa et al., 2010) on the beneficial effects of combined caffeine and glucose was published online in Human Psychopharmacology: Clinical & Experimental last October. The authors recruited 40 healthy undergraduate students with ages between 18 and 25 that were non-smokers and low-caffeine consumers. The researchers divided participants in four groups of 10 (5 males, 5 females) to which they distributed beverages with different contents of caffeine and glucose: the ‘placebo group’ received just water, the ‘glucose group’ drank water + glucose, the ‘caffeine group’ took water + caffeine, and the ‘glucose-caffeine group’ had water + glucose + caffeine. Before and after drinking the beverage participants had to complete a test consisting in identifying numbers that occurred twice sequentially in a series of 27 four-digit numbers. While they carried the tests researchers scanned their neural activity by functional magnetic resonance imaging (fMRI) and measured their performance (i.e. number of correct and incorrect answers, and reaction time). The concentration of glucose in the blood and the caffeine levels were also measured.

After examining the data using analyses of variance for the different performance variables, the scientists found that all groups showed similar performance results, no matter the beverage, and did equally well before and after having the drink. However, the fMRI images showed that in the ‘glucose-caffeine group’ the areas of the brain related to the attention and memory processes activated more weakly than in the other groups. The explanation proposed by the authors of the study is that when caffeine and glucose are taken in together a synergistic effect occurs. That is, each substance enhances the other substance effects. In consequence, the combined intake of glucose and caffeine would increase the efficiency of the attention and work memory processes.

But as the authors of the study declare, these results are preliminary. Given the strict and limited conditions imposed on the participants it is still soon to generalise these results to the general population. For example, the participants were young healthy undergraduate students. Is the effect the same for older or sick people? Also, the participants had slept well and for at least 6 hours before the test sessions. In fact, many people take drinks containing caffeine and glucose to keep themselves awake and/or because they haven’t slept well. Would the effects be comparable in these situations? Another question that should be considered according to Serra-Grabulosa and his collaborators is the dosage. Having different caffeine content, it would be interesting to know which kind of sugary caffeine beverage is more effective. Which is best to keep you alert, a brewed coffee or an espresso? And then, of course, that one permanent question is still open: ‘one sugar or two?’