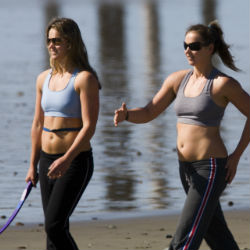 With the summer finally here, now is the time you wish you'd kept up those arbitrary New Year's resolutions and joined the gym, maybe cut down on the booze, or perhaps even tried using some self restraint and not gorged yourself on that tub of Häagen-Dazs you found in the freezer.
It seems that wherever you turn, there's a barrage of quick-fix diets and "scientifically proven" methods in order to make us look our best, or at least attempt to emulate the figure of the latest celebrity to be placed on the cover of Elle.
Well, it seems there's a new addition to the fat-fighting army and its name is Hypoxi. Hypoxi Vacuum Therapy claims to offer amazing slimming results, burning off excess fat and reducing cellulite around the buttocks, thighs and stomach, via a combination of exercise, improved diet and "targeted low atmospheric pressure" as the website states. The idea is that by performing exercise for 30 minutes a day, three times a week over six weeks AND receiving alternating doses of low and high pressure to the lower body at the same time, fat is burnt off more effectively than conventional exercise and fatty acids and toxins are transported away from the "problem areas" to "the blood-purifying organs". In addition, if lying down in the Hypoxi L250 (one of the devices used), the "forces of gravity" (yes, there's more than one gravitational force apparently) help to transport these toxins away. Fascinating stuff, no?
OK. I'm holding my breath too. It seems that the regular prolonged exercise regimen and the nutrition plan, which advises clients to "... consume a healthy balanced nutritious diet and drink plenty of water" are good enough guidelines alone and have served most of us fairly well in staying healthy. But from now I'm going to steer clear of using phrases in inverted commas and suppress all my manifestations of cynicism. For this piece, I shall focus on the reporting of the purported science behind Hypoxi Therapy.
The Hypoxi website claims that clinical trials of vacuum therapy have been conducted as early as 1997, where 1,530 women were recruited into a six-month study. They concluded at the end of the study that women who used Hypoxi Therapy saw a reduction in thigh circumference three times greater than those women who only participated in conventional exercise.
My main issue here is with the lack of information provided. How were the women split between the Hypoxi group and the control group? How did the two groups differ in patient characteristics, mean body measurements and exercise/nutrition plans? Were the trial conductors blinded with respect to the therapy that the patients were receiving? Why weren't there any men recruited for this trial?

Even the presentation of results on the website is far from convincing. There are no confidence intervals around estimates of thigh, waist, buttocks or belly circumference, or weight, so we have no idea about how variable or statistically significant the results are. Even the simple subtraction of two measurements is incorrect for weight differences (see Figure 1). Also, are the numbers provided central averages, or the largest changes observed? In Figure 1, why has there been a comparison made after two weeks, despite the trial apparently being conducted over six months? Perhaps one fundamental question to ask is whether or not the trial was designed, conducted and sponsored by Hypoxi itself. Luckily, an independent study has been conducted.
In 2007, an independent trial was conducted by the University of Salzburg, with four study groups:
Group 1 - Hypoxi Therapy three times per week and special nutrition programme;
Group 2 - Conventional ergometer training with the Hypoxi-Trainer but without low and high pressure, as well as nutrition programme - the placebo group;
Group 3 - Nutrition programme without training - the nutrition group;
Group 4 - Without any intervention - the control group.
We are not told how many patients were recruited, nor how they were divided into the groups and how each group's characteristics differed. In the summary of findings, we are informed that Group 1 showed outstanding results compared to Group 2 and Group 3 (no comparison to the control group was provided). The best result, in my opinion was that "positive changes in skin appearance and cellulite were observed - the subjective evaluation of the team rated the effects of Hypoxi 400% better than the effects of diet and training". Applying a subjective evaluative technique (whatever that actually was) on what is essentially attractiveness and providing an exact, quantitative, objective figure is astounding, especially when once again, no ranges or confidence intervals are stated around such estimates.
I have yet to find the Salzburg paper, but I am sure if would make a very interesting read. I would like to point out that I am not openly discrediting Hypoxi therapy - I haven't tried it and to date I am unable to actually find any of the evidence that supports it, apart from on the company website - but I am raising the point that we should be able to question the scientific rationale behind new treatments and have all relevant information and evidence (for and against) presented in an easy-to-interpret manner. A healthy degree of scepticism is entirely natural; never let that get sucked away.
back to top