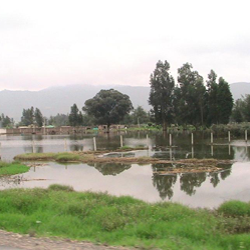 The topical image that comes into mind when thinking about tropical countries is that of palm trees in a hot sandy beach, and you wouldn’t expect a country dripping with water and green pastures. However, even if the size of Colombia (1.14 million km^2) is only about 1/8th of the United States, it is one of the countries in the world with a largest volume of available water, only surpassed by Russia, Canada and Brazil. Colombia’s annual average yield is 67 litres/s/km^2, almost seven times the world’s average (10 litres/s/km^2).

Average precipitation is 3000mm/year, comparable to the precipitation of western Highlands in Scotland, and it ranges between 50mm/year in some regions of the Atlantic coast and 10,000-13,000mm/year in some regions of the Pacific coast. Indeed, Colombian Andean Mountains are as green as the Highlands and, of course, you find palm beaches too and the Amazonian forest.

The problem is that besides to spatial variability there are important temporal variations in precipitation from year to year, which can even cause droughts or floods depending on the sign of the anomaly. In the last months, increased precipitation has caused floods and landslides, which have damaged buildings, water ducts, bridges, roads, etc. By the end of April, 12,000 million Colombian pesos (about $6.6 million or £4 million) had been spent by the Government of Colombia to fight the effects of the La Niña episode now finishing. From April 2010 to April 2011, about 3 million people and 714,229 families had been affected, 418 people died, 516 were injured and 77 were missing. The statistical analysis of precipitation patterns and the estimation of the effects of climate variability in advance can be useful for an appropriate management of water resources and planning of actions to prevent damages to people and properties.

In wide regions of Colombia the El Niño Southern Oscillation (ENSO) phenomenon is the main long-term climatic forcing. ENSO cycle is a naturally occurring cycle of warming (El Niño) and cooling (La Niña) of the sea surface waters in the equatorial Pacific Ocean and its associated atmospheric interactions (rainfall, air pressure, atmospheric circulation) that influence climate at worldwide scale (the International Institute for Climate and Society provides maps displaying the probability of above-, near-, and below-normal temperatures and precipitation for different regions and periods of the year). ENSO cycle has a typical periodicity of 3-5 years, although it can vary from 2 to 7 years according to historical records. Typical duration of El Niño episodes is 9-12 months and can attain even 3-4 years on occasions, while La Niña episodes typically last 1-3 years. The transition periods between El Niño and La Niña episodes are ENSO-neutral years. Sea-surface temperatures and atmospheric behaviour in neutral years approach the long term average.

ENSO indicators are strongly correlated with precipitation and river flow in Colombia (see Gutiérrez & Dracup 2001 and Poveda et al. 2010). During El Niño events, precipitation and river flow decrease. The effect on river flow is most apparent in December, January and February, when reductions can be greater than 20%, except in the Orinoco basin where it is of only 5-15%. Since most of the energy in the country is produced by hydroelectric power plants, in case of severe droughts electric power shortage can occur. Also, El Niño phenomenon causes an increase in malaria cases in Colombia: higher temperatures speed up the cycle of the parasite (Plasmodium vivax, P. falciparum) and increase the survival of the vector (Anopheles mosquito), and lower river flows create areas of quiet waters, favourable for the reproduction of the vector. Instead, during La Niña events, rainfall and river flows increase. Besides to floods, landslides can cause important havoc during rainy episodes: blocking of roads, destroying buildings, etc. Analysing data from the Dept. of Antioquia from 1921 to 1999, researchers of the National University of Colombia found that landslides are more frequent in La Niña years (7 landslides per year) than in ENSO neutral years (5 landslides per year) and El Niño years (3 landslides per year), because of the higher accumulation of water in the soil.

In most cases, maximum correlations between ENSO indices and river flow occur for a lag of 3 months. The effects, though, are felt earlier and more intensely in the west than in the east of the country. This means that it is possible to predict approximate river flow behaviour about a trimester ahead and plan resource reallocation well in advance. Of course, statistics cannot tell exactly which will be the damages during a certain extreme weather episode, but they allow estimating the expected damages with a sufficient degree of approximation – as insurance companies know rather well being the basis of their business. Unfortunately, problems other than accuracy of estimation issues (corruption, budgetary problems, etc.) prevent the application of better management policies that Colombian people desire and deserve.