PhDs couldn't tell an actor from a renowned scientist 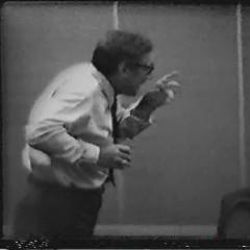 Forty years ago, a singularly interesting lecture was held at the University of Southern California School of Medicine. The subject was 'Mathematical Game Theory as Applied to Physician Education.' The speaker was Dr. Myron L. Fox from Albert Einstein College of Medicine, a pupil of von Neumann and an authority on the application of mathematics to human behavior. The attendees were psychiatrists and psychologists (MDs and PhDs) who were gathered for a training conference. They listened to the lecturer with great interest, asked many questions and were satisfied with speaker's replies. They gave him flying grades in the satisfaction questionnaire. Nobody suspected anything wrong. In reality the speaker was an actor and knew nothing on the subject of his lecture.

Donald Naftulin, John Ware, and Frank Donnelly who wanted to find out whether student evaluations of teachers had any meaning conducted this experiment1. The actor was Michael Fox. He based his talk on the Scientific American article on Game Theory. He borrowed from the article some phrases, but not any sense. He mixed them up with allusions to unrelated subjects, which on purely verbal level may appear relevant. He conducted himself with great confidence and showed such a mastery of the aforementioned allusions that the audience was convinced that a luminary is standing before them. A 100% had answered in the questionnaire that Dr. Fox had stimulated their thinking; a 90% that he presented material in a well-organized form, and 90% that he put his material across in an interesting way.

This is, of course, an old story. It is still worth repeating since it is almost forgotten and most readers never heard of it. However, I would not repeat it unless I had something new for everybody. I found Dr. Naftulin and got from him the video of the lecture. You can view it here. And here you can view clips from Michael Fox’s other films.

My own interest in such phenomena started with the discovery that 80% of scientific citations are not read by the citing authors but copied from the lists of references used in other papers2. Thus, an act of scientific citing is not a result of independent evaluation of the quality of the cited paper, but merely an imitation of other citer's selection. This way when a paper was once cited it is more likely to be cited again, and after it was cited again it is even more likely to be cited in the future. As a result of this chain reaction the paper can become highly cited independently of its content. The degree of authority of a scientist is determined by the number of citations to his papers. Thus, a scientist can become an authority independently of the content of his papers. This conclusion seemed bizarre to the people who could not imagine that a person who knows nothing can pass as an authority. Dr. Fox lecture demonstrates that it is quite possible. Thus, this forgotten experiment gives additional support to the conclusion of the theory of citing2.