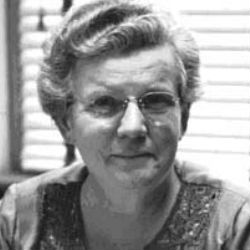 Happy International Women's Day! If last week's article proved anything, it's that there are lot of extraordinary statisticians who also happen to be women out there (keep those names coming!). So what better way to celebrate today than with the first lady of statistics?
Gertrude Cox didn't intend to become a statistician. After graduating from high school in 1918, she decided she wanted to be a deaconess in the Methodist Episcopal Church. Thinking that some knowledge of psychology and craft could be useful in her chosen career, she enrolled at Iowa State University to study these subjects. However, she chose to major in mathematics as that subject had come naturally to her in high school. In order to pay her college expenses, she landed a job in the computing lab of her calculus professor, George Snedecor. Encouraged by this experience, she went on to study statistics, receiving Iowa State's first Master's degree in statistics a couple of years later.
After a brief stint at Berkeley, her former mentor George Snedecor persuaded Cox to return to Iowa State to set up her own computing laboratory. She worked closely with the psychology department there, working on the analysis of psychological data. She also started teaching her 'Design of Experiments' course, a course that would become renowned and lead to a book (now a classic) on the same subject. Most graduate students in agriculture and other science-related subjects at Iowa State were required to take her course.
In her course, she set out three basic principles for setting up an experiment: its objectives should be clear from the outset, the experiment should be described in detail, and an outline of the data analysis plan should be drawn up before the experiments starts. (If you do it after you can be accused of choosing analysis that will give results that you wanted.) These principles were important to be able to replicate studies, the value of which we're only now starting to appreciate (see the Reproducibility Project for instance). She also emphasised the need for randomisation and experimental controls, both still uncommon at the time.
Cox went on to head many departments and institutes throughout the southern US states, became president of the American Statistical Association in 1956, and was a founding member of the International Biometric Society who, coincidentally, are honouring that other famous Cox (Sir David) in statistics today.(And whom, I cannot resist adding, teamed up with yet another famous statistician George Box to produce what can only be called the Cox-Box transformations.)  After her official retirement, she set out to promote the development of statistical programmes in Thailand and Egypt, and kept working as a consultant. 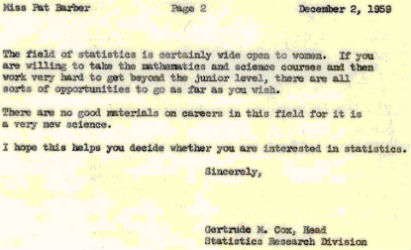 http://www.lib.ncsu.edu/exhibits/cox/images/barber3.jpg
After her death, the American Statistical Association and Caucus for Women in Statistics set up a scholarship to encourage more women to enter statistics. This award, given out annually since 1989, has already resulted in an impressive list of recipients. If you're keen to follow in Gertrude Cox's footsteps (and happen to live in the US or Canada), than you'll be happy to know that applications to the Gertrude M. Cox Scholarship are open until 1 April.
back to top