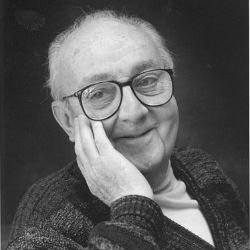 ‘Essentially all models are wrong, but some are useful’. That quotation comes from George Box, one of the great statistical minds of the 20th century. He died last week, at the age of 93. British born, but with his most influential years spent in America, he was genial, humorous and modest, but nevertheless one of the most important statisticians of the last 60 years; yet he always called himself an accidental statistician.
At a speech in 2011 to mark the 60th anniversary of the statistics department he founded at the University of Wisconsin he describes the accident. At 19 years old, close to getting a degree in Chemistry, the war broke out and he joined the Army. They put him in the Engineers; he used to say that whenever he saw a bridge after that he would catch himself calculating where he would put the charges to blow it up. But before he could actually do any bridge-blowing he was moved to a secret experimental station in the South of England. "At the time the Germans were bombing London every night and our job was to help to find out what to do if, one night, they used poisonous gas. There were a lot of experiments with small animals, and I was a lab assistant. The results I was getting were very variable and I told my colonel that what we really needed was a statistician."
He said “We can’t get one, what do you know about it?” I said “Nothing, I once tried to read a book about it by someone called R. A. Fisher but I didn’t understand it”. He said “You’ve read the book so you’d better do it”, so I said, ““Yes, sir”. I asked the Army for some literature about statistics and they duly sent me some.”
Later in the war he came across a problem he could not solve. He went to see the same R.A. Fisher, who happened to be the founding father of modern statistics, at Cambridge. “The army did not know how to send a sergeant to see a professor, so made out a railway warrant that said I was taking a horse to Cambridge.” They became lifelong friends; indeed Box married Fisher’s daughter Joan.

Virginia Woolf wrote about a character with a mind that “kept throwing up from its depths, scenes, and names, and sayings, and memories and ideas, like a fountain spurting over”. George Box is the embodiment of that active mind. Dinner with George is a spurting of stories, songs and anecdotes about his work and friends. An Accidental Statistician jumps you into that fountain of ideas. It is great fun even if books about statistics and science are normally absent from your reading list.
- P. MacBerthouex , from the forward to An Accidental Statistician by George Box.

After the war he worked for ICI, designing their experiments and industrial processes: "Typically a 1% increase in yield could give huge profits” he said; hence his value to them. They asked him to proofread a book; the alterations he made to it were so good that he ended up as co-author. He was invited to lecture in America, and in 1960 the University of Wisconsin asked him to set up their new statistics department. He stayed there the rest of his life; the department became world-famous. One of his best-known innovations there was his Monday night beer sessions. “Early on it seemed to me that students were learning a great deal about statistical theory but very little about how to use it. The Monday night beer session was not an official course. It happened in my house and there were no course requirements or grades or anything. You came if you felt like it. We also had talent scouts looking for people who had problems they wanted to discuss. Typically in 20 minutes or so the problem was presented and then there was a general discussion about how it might be solved. I believe people learned how to solve problems there.” George supplied the beer and cider; as his students, we brought in the speakers and one of our most important tasks was to stop at the liquor store to pick up the beer. For many the Monday night meetings provided their first encounters between science and statistics and it was a wonderful way to see statistics in action’ wrote one of his students in tribute.
He was the sort of statistician who has practical influence. His greatest impact was on how experiments should be designed. His book on that subject, Statistics for Experimenters, became an instant classic. ‘I remember the excitement I felt on reading the description of how the attainment of knowledge is an endless spiral proceeding alternately from deduction to induction and back’ was one recollection of it. But equally-important mathematical results such as Box–Jenkins models, Box–Behnken designs, and especially the Box-Cox transformation are standard and vital tools. The latter was devised with the equally-revered David Cox; legend has it that Box and Cox collaborated because they couldn’t resist the title that would result.
His last work was his autobiography, completed just before his death. It is to be published by Wiley in May, but the Kindle version is already available for download. It is witty, funny, informative and very readable. Its title is The Accidental Statistician; and it is a fitting tribute to the man and his life.
back to top