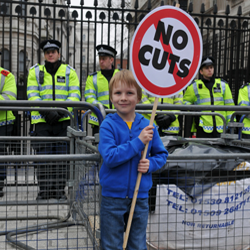 There has been no real change in the proportion of children living in poverty in the past year, according to new statistics released by the UK government. The proportion of children living in relative poverty, before housing costs were taken into account, remained stable at 17% in 2013-14 – or 2.3m children. After housing costs, the number rose very slightly from 27% to 28% on the previous year after rounding – standing at 3.7m children.

The UK’s relative poverty measure captures the proportion of children in households with income less than 60% of the median for the country – £416 per week before housing costs for a couple with two children. Since 2010, this measure of child poverty has been stable because despite unemployment, and cuts in family benefits, median incomes across the population have fallen. Median income did not rise again in 2013-14 and the cuts were still working their way through.

This new Conservative government is now raising the same issue for the opposite reason – that if median incomes rise, so too will child poverty. There are signals that the government may move to abandon the legally binding child poverty targets introduced by the Labour government in the 2010 Child Poverty Act. Yet this is the measure used by the European Union, the Organisation for Economic Co-operation and Development, UNICEF and most governments in rich countries.

No single poverty measure is perfect. For that reason a portfolio of measures has been developed over the past three decades as a result of an open discussion between academics and government statisticians. Each measure has its advantages and disadvantages. Four measures were incorporated into the Child Poverty Act targets and a fifth was added later. They are:

Most of these statistics are also produced by the Department for Work and Pensions after housing costs and also using 50% and 70% thresholds. The graph below shows what has been happening on each of these measures since 1998 and the trends needed to reach the 2020 Child Poverty Act targets.

{mbox:/significance/2015/graphs/child-poverty-1998-2021.png|width=630|height=421|caption=Click to enlarge|title=Trends in the child poverty act target rates (% of children). BHC stands for before housing costs.}

The government says that it would like to take account of the causes of child poverty and has mentioned: indebtedness, family breakdown, addiction, housing problems, educational attainment and worklessness. All these may be associated with child poverty but they are not measures of child poverty – rich families also break down.

What ministers are clumsily trying to do is to get the measures to focus on individual behaviours rather than most of the structural causes of poverty. These are unemployment, low pay (67% of poor children live in households with someone in work), high childcare costs, high rents and, yes, cuts in benefits and tax credits and the overall erosion of a safety net. The £12 billion more cuts in working-age benefits on top of the billions already imposed are set to wipe away all the gains in child poverty reduction since 1999.

Poverty is a lack of material resources, not drug addiction or family breakdown or any of these factors. Children living in poverty in the UK as currently measured are more likely to die in the first year of life, be born small, breathe second-hand smoke, become overweight, perform poorly at school, die in an accident or become young parents. As adults they are more likely to die earlier and be out of work, live in poor housing, receive inadequate wages and report poor health.

Child poverty is currently costing £29 billion per year, and the long-run impacts of failure to address the problem will cost much more. The response from politicians appears to be to re-define the measure.