A bet on life: Irregular immigration 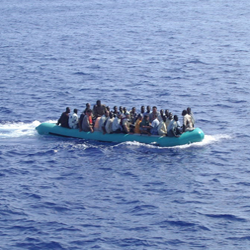 Year after year thousands of irregular immigrants from North and sub-Saharan Africa risk their lives in dangerous seas to travel to Spain and Europe through the Canary Islands or across the Strait of Gibraltar. This month, the Spanish Association for Human Rights of Andalusia (Associación Pro Derechos Humanos de Andalucía, APDHA) published figures (link in Spanish) of irregular migrants intercepted by police in 2011. With the economic crisis the number of intercepted boat migrants descended from 15,572 in 2008 to 5,369 in 2010.

However, last year, during the toughest moments of the economic crisis yet in Europe, the number of irregular immigrants increased again to 8,867. Most of the migrants (almost two thirds) travelled by boat. Some were so desperate that one out of ten migrants used fragile toy rafts and around 17% of them dared to defy strong currents in the 14-kilometre strait by swimming. Why, one wonders, would they risk their lives in such risky trips to enter countries in the midst of an economic crisis? From our comfortable – but increasingly distressing position in Europe - it doesn’t seem to be rational. But is it? What can statistics tell us? The main routes of migration into Europe through Spain are two. The first one passes along the western coast of Africa from Guinea, through Senegal, Gambia, Mauritania, the Western Sahara and Morocco. The second, the inland route, starts from Guinea and travels through the Ivory Coast, Ghana, Burkina Faso, Gabon, Congo, Cameroon, Nigeria and Niger, and then passes through Mali, Algeria and Morocco. In fact, in 2011 the greatest proportion of boat migrants (5,539) came from sub-Saharan countries, a large proportion came from Morocco and Algeria (3,220) and a smaller number came from other places (108). Most migrants, nine out of ten in fact, were men. The tragedy is that around 2% of all migrants, a total of 198 people, died or disappeared last year during the crossing, or just before the crossing in Morocco and Algeria or when they reached Spain. The APDHA doesn’t report the number of deaths that occur in Western and Central Africa.

What is that they left behind? Hunger, war, insufficient health services? As you can see in the table below, people in sub-Saharan Africa aren’t happy at all with their lives, and North African people are neither satisfied nor dissatisfied. Bad life conditions and insufficient healthcare south of the Sahara result in very high mortality rates and low life expectancies. In addition, according to the World Health Organization (WHO), about 2% of deaths in sub-Saharan Africa are due to violence, war and civil conflict. The situation is somewhat better in the North of Africa. Although North African people do not live lives as well as Europeans do, the Happy Planet Index tells us that they do a rather good job with what they have. To avoid confusion, you should know that the Happy Planet Index doesn’t tell us how much happy people in a country are, but tells us about the efficiency of a country’s use of natural resources to make their citizens live longer and happily. In this respect, we Europeans live well while wasting a lot of the world’s natural resources, whereas sub-Saharan countries are nowhere near providing happy lives for their citizens. Is it that strange they want to come? 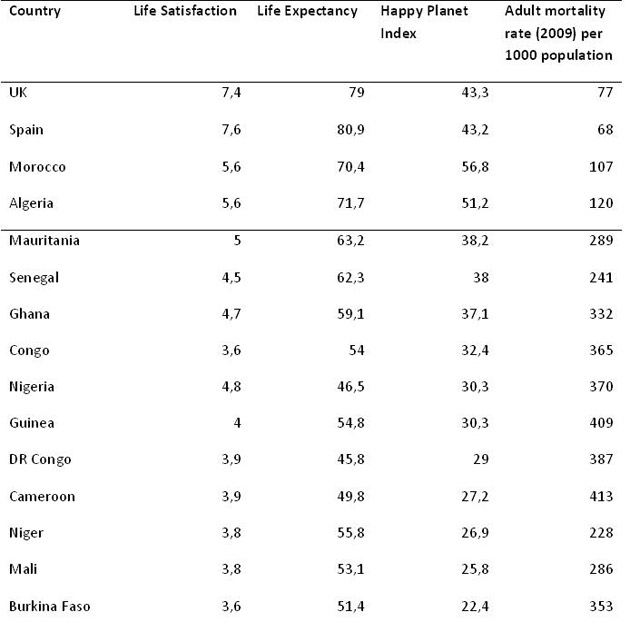 After all, the human species is a migrant species and it is in our nature to find solutions to avoid unpleasant situations or seek new resources and opportunities. Migration from Africa is not actually new; our ancestors left Africa through Arabia and dispersed all over the world. And they have not been the only migrants. For example, the migration of Barbarian tribes (Goths, Vandals, Franks, Angles, Saxons, Huns, etc.) – “irregular migrants” coming from the North for a change - helped put an end to the Roman Empire which was already in trouble. Recall also that because of the late 1840s' Great Famine in Ireland, two million Irish people emigrated to Britain, Canada and the United States between 1845 and 1855. In the end it’s all about perceived expectations - a bet on life. When staying at home seems riskier, going out in search of a better life may pay off. Were you born in a sub-Saharan country, where would you place your bet?