How many British immigrants are there in other countries? 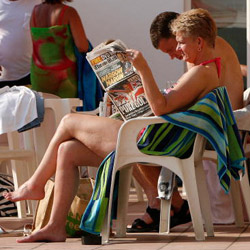 The British public is obsessed with immigration. The notion of Johnny Foreigner coming over here, taking British jobs and straining public services is now rampant in UK politics. Regardless of what statistics and evidence say, the myth of Britain being ‘swamped’ by immigrants is proving incredibly resilient. But what about the Britons who emigrate abroad and make use of the public services in their adopted nations? How many of them are there?

This is a difficult question to answer accurately. The Office for National Statistics (ONS), by its own admission, does not compile statistics for Britons living abroad. The ONS International Passenger Survey only indicates movements through British airports and sea ports. However, the Home Office has published reports that bring together academic research on British emigration that details various patterns in the outward flow of people from Britain.

Census and survey data can offer a clue, but they will likely be an underestimate of the true expat population. The problem is compounded by British residents who don't officially register in their adopted country.

However, It has been estimated by the World Bank that between 4.5 million and 5.5 million Britons live abroad, that's around 7-8% of the UK population. To put that in context, only about 0.8% of Americans, 3% of Spanish and 2.1% of Australians are expats.

So where are all those Brits living? The United Nations Population Division compiles estimates for international migration around the world. The table below shows the top ten destinations for British expats in their 2013 data, and how the British population has changed in those countries since 1990 and 2000.

Estimates of the UK’s migrant stock by destination for the mid-point (1 July) of each year. The estimates are based on official statistics on the foreign-born population.

Many countries appear on the list due, in part, to Britain’s colonial history which set down deep roots in those nations. Due to visa restrictions, the majority of those immigrants are likely to be either skilled workers or they will be resident there because of family connections.

Back in Britain, the immigration debate is mostly focussing on the influx of EU migrants. So, looking at this from the other way round, how substantial is British emigration to the top three EU countries in the table above?

The amount of Brits in Spain is a difficult one to quantify because a significant portion of them will not be registered residents. There were 269,470 Brits in the 2007 Spanish census, but this rises to around a million when estimates for the population of non-registered Brits are added.

One of the most popular areas for the British in Spain is the Andalucía region - home to Malaga, Marbella and Torremolinos. The graph below tracks immigration to Andalucía by Brits from 2002 to 2011. 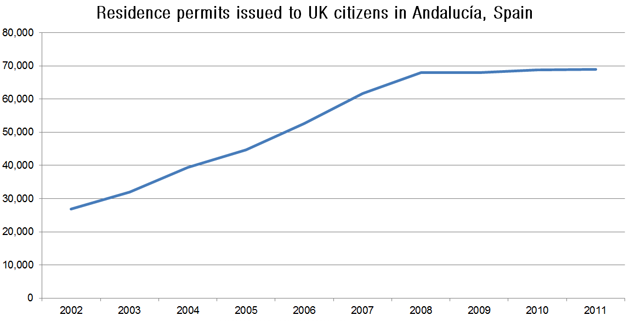 This illustrates a large influx of British people into the area over the last decade which now seems to be levelling off (a trend seen across Spain.) Such a large stream of immigrants prompts questions of how well they are integrating, a favoured subject of the British tabloids back home.

An ESRC funded survey conducted in 2005 showed that a third of the British immigrants rarely or never meet Spanish people (other than in shops and restaurants), 60% did not speak good Spanish, half do not have residence cards, and over a third are not registered on the town hall register.

So the next time you read about British schools being under pressure from the children of immigrants, spare a thought for the schools in Andalucía. The graph below shows the amount of British children that were absorbed into Andalusian schools since the mid-90’s. 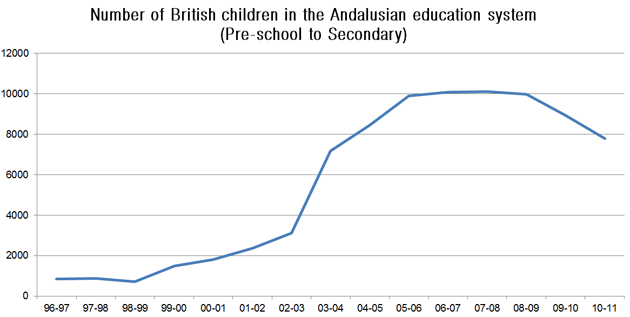 Similar to Spain, the British population in France has grown steadily over the years. The graph below shows the level of Brits living in France as captured in different census years. 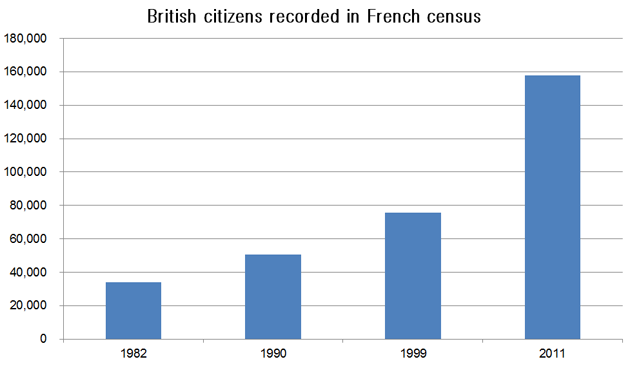 The French statistical agency conveniently breaks down the 2011 British population into age groups. 15% are aged 0 to 17 years of age and 52% are between 18 and 59 years of age. A third (33%) are aged 60 years plus and are in the retirement years of their life or rapidly approaching it.

The most popular 'department' of France (outside Paris) for the British to emigrate to is the Dordogne, just ahead of Alpes-Maritimes (home to Nice and the surrounding Cote d’Azur area). The region is a popular destination for retirees, with half of the Brits over 55 years old and having arrived in the last five years.

Such an influx of older British residents in France will inevitably place pressure on the French health system - though treatment given to British residents on a state pension is paid for by the UK through EU agreements.

The data from Ireland offers a different perspective on the British immigrant as the two countries are so interconnected historically, geographically and economically. Ireland is the UK’s fifth largest export market and Britain is Ireland’s most important trading partner.

So we would expect migration to Ireland from Britain would have steadily increased as the Irish economy boomed in the Nineties and Noughties, only to tail off after 2008 as the economy nosedived. 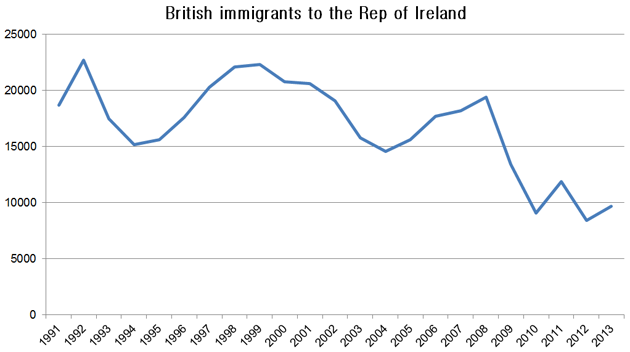 The ratcheting up of the immigration issue has partly led to David Cameron promising to radically renegotiate Britain’s membership of the EU. If that comes to pass, it’s the British people in the data above that he needs to consider rather than the phantom Romanian horde.

Changing attitudes in the immigration debate is a monumental uphill battle when you consider how far perception is from reality. As part of a survey the RSS commissioned from Ipsos MORI last year, people were asked what percentage of the British population they thought were immigrants? The collective answer was 31%. The actual figure is 13%.

Even more confusing, another poll from Comres asked if all citizens of other EU countries should have the right to live and work in the UK? Only 36% agreed, against 46% who disagreed.

The pollsters then asked a different question, should British people be free to live and work anywhere in the EU? This time 52% agreed with only 26% disagreeing. It seems the British want to have their gâteau and eat it.

This article was amended on December 2 2014. The first version included a table that used estimated figures from an IPPR study (2008) for the top British emigrant destinations. This was amended to include more recent data from the United Nations in 2013.