How to measure democracy 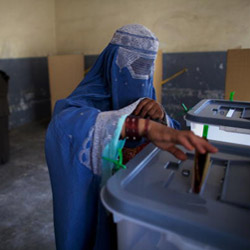 The European elections on Thursday might not arouse much excitement among the general public but the right to vote in a meaningful election is one of the key characteristics of a democracy. If we were to make a list we might also consider a free press, the rule of law, judicial independence, religious freedom, gender equality and electoral turnout to be characteristics of a democracy.

In the second approach, measurement focuses on a more limited concept of democracy, typically the characteristics of the electoral processes in a country, which researchers judge they can measure with a high degree of reliability. The problem with the second approach is, however, that while a narrower definition of the idea of democracy might make measurement more reliable it might not necessarily be more valid, in the sense of capturing what democracy really means to people.

Each dimension is measured using a series of indicators which are then summed and scaled to create a composite scale varying from 0 to 10. In addition, a total scale is constructed from the average of the five dimensions which is used to group countries into full democracies, flawed democracies, hybrid regimes (having both democratic and authoritarian characteristics) and authoritarian regimes. According to the EIU index the most democratic countries include Norway and Sweden while North Korea is the least democratic country in the world.

Although the EIU index is a broad measure of democracy including numerous indicators of the quality of democracy, such as electoral turnout, we can also use the data to illustrate the utility to measurement of using a more limited concept of democracy. The highest correlation between the separate dimensions of the EIU Index is found between the dimensions measuring the electoral processes and extent of civil liberties in a country. The figure on the right plots the relationship between the two dimensions using data from 2012.

Does this mean that we can exclude the other dimensions of democracy in the index from a discussion of democracy and instead measure democracy using only the electoral processes and extent of civil liberties in a country? For some purposes I think the answer is probably yes. If there is no electoral representation in a country, the political culture, political participation or functioning of government are not likely to be democratic. A limited approach to measuring democracy therefore seems adequate for making broad statements about the variation in the nature of government across countries.

In countries such as the UK, however, we know very well that aspects of our political culture such as the extent of trust in politicians do clearly capture something important about people's attitude to democracy. It seems surprising therefore that the lowest correlation between the separate dimensions of the EIU Index is found between the dimensions measuring the political culture and electoral processes in a country.

The figure on the right shows, however, that although there is little relationship between electoral processes and political culture in authoritarian and hybrid regimes, the democracy of electoral processes is associated with political culture in full democracies. The more nuanced approach to measuring democracy may therefore be useful in distinguish differences in the nature of democracy within countries that are full democracies. The political culture and functioning of government may be important in explaining why Norway and Sweden, rather than the US or the UK, top the list of democratic countries. But this is of limited use in explaining differences in democracy outside those countries.