Should affirmative action be replaced with random selection? 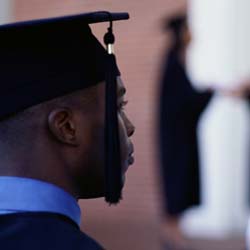 The US Supreme Court recently came out with its latest decision related to affirmative action. The case at hand was whether voters in the state of Michigan have the right to decide if race should be considered in decisions about who ought to be admitted to public colleges or universities in the state. Voters had already decided that race shouldn’t be used in this context but a lower court had determined that Michigan voters couldn’t make such a decision. The Supreme Court overturned the decision of the lower court, upholding Michigan voters’ right to decide this question.


As anyone who’s followed the affirmative action debate in the US knows, the policy is highly controversial. Proponents have argued that it’s essential to right historical as well as current wrongs committed against African-Americans, women, and members of other 'minority' groups. It’s also been hailed as a way to promote diversity in educational settings and a number of key professions and occupations.

Opponents have responded that affirmative action is a form of discrimination and that race or gender based discrimination has no place in a society which claims to be against such behavior. Instead decisions regarding who should be admitted into universities or other institutions should be based on merit. This of course raises the question of what constitutes merit, and in the university context decisions about merit have often involved appealing to scores on a standardized test called the Scholastic Aptitude Test (SAT).

The use of test scores in admissions decisions has itself been a source of controversy. Critics of their use have argued that test scores don’t predict very well how one ends up doing in college. Supporters have countered that SAT scores are quite good at predicting how well college students do once they’re in school. For the sake of this post, I’m going to put this question to one side and simply assume that SAT scores are useful for making predictions about how people will eventually do in college. This is because I want to focus on another issue - a proposal that’s been put forth as a kind of compromise in the affirmative action debate.

Norman Matloff is a statistician and member of the computer science faculty at the University of California at Davis. He’s written several short pieces about an alternative to affirmative action (one of which appears here). The basics of how that alternative might work are as follows.

Some minimum threshold on the SAT would be determined. All applicants to a university who scored above that minimum would be eligible for admission. The purpose of the minimum is to weed out those who have little chance of doing well in the program. This again brings up the question of whether SAT scores predict later achievement but remember I’m assuming that this is the case for the sake of discussion.

If the number of people who scored above the minimum exceeded the number of available slots for admission, then some random selection mechanism would be used to select from the eligible pool of applicants. Matloff argues that the random selection mechanism would be a way of promoting diversity in admissions but at the same time it would meet some of the concerns of opponents of affirmative action. This is the sense in which it is a compromise.

Political scientist Bernard Grofman and mathematician Samuel Merrill have written a paper where they examine some of the statistical issues related to Matlof’s proposal. To understand their analysis you’ll need to be familiar with a little notation:

I’ve chosen the terms minority group and majority group deliberately in order to keep the discussion general. You can think of these terms as referring to blacks and whites, Latinos and whites, women and men, or whatever other two groups you care to. Grofman and Merrill’s discussion is in terms of two group comparisons which is why mine is too.

If you read the Matloff article carefully, you’ll see that he thinks the idea of admitting people with the highest SAT scores regardless of race may place too much emphasis on SAT scores as a criterion of acceptance. However, his allowance for SAT scores to play some role in his random selection scheme means he thinks they may have some value in admissions decisions. So let’s assume that T using Matloff’s scheme would be less than T used in a race, gender, etc. 'blind' admissions process. To make the distinction clearer we’ll call these Trandom and Thighest, respectively.

What Grofman and Merrill show1 is that using Trandom in conjunction with random selection to make final admission decisions, would result in a higher proportion of those accepted being members of the minority group than would be the case under the Thighest admissions process. This might satisfy proponents of affirmative action but upset opponents of it. However, Grofman and Merrill show something else that might reverse this outcome, satisfying opponents of affirmative action but upsetting proponents of it.

Affirmative action has been a bitterly contested policy in the US. As far as I can tell, statistical analysis has received less attention than the more publicized parts of this debate like politics, economics and ideas about the appropriate use of race and gender. What Matloff’s proposal and Grofman and Merrill’s analysis of it suggests is that statistics may have something to contribute to this discussion as well.