Legal vs clinical trials: an explanation of sampling errors and sample size 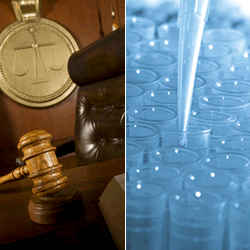 Clinical trials are often conducted to test new drugs, especially drugs for treating cancer. The processes surrounding clinical trials are carefully designed, conducted and monitored. Often the trials are conducted internationally, over several years, and involve hundreds or thousands of participants.1 These trials can produce huge amounts of data that needs to be analysed.

A key concept in drawing an accurate conclusion from statistical data is considering the possibility of sampling errors. These errors can be explained by an analogy which compares the processes involved in legal trials, and the processes in clinical trials.

Clinical trials of a new drug may involve four phases. The aim of Phase I is to assess safety issues associated with the drug. Typically, this phase is conducted on a relatively small number of healthy participants. Phase II investigations are intended to verify the findings from Phase I on participants who are patients, and to make a preliminary assessment of the efficacy of the drug. Phase III clinical trials are devoted to comparing the new drug with the current standard treatment, or perhaps no treatment using a placebo. Often the term ‘clinical trial’ is used loosely to describe a Phase III clinical trial. Phase IV trials monitor the new drug after it has been released on the market.

In clinical trials, patients may be allocated at random to two treatment groups. We may regard our two samples of patients as being chosen at random from two populations of patients. There is chance involved in this process. This randomness can lead to these two types of sampling errors, called Type 1 and Type 2 respectively.

A Type 1 error occurs when one concludes from the results of the experiment that the new drug is better than the standard drug, even though this is not the case. A Type 2 error when one derives that the new drug is not better than the standard one, even though it is better. We can see similar potential errors in the legal process.

The key point is that often, the sample size can be calculated and there are mathematical formulae for calculating sample sizes2. Deciding on sample sizes is not a matter of guess work.

The importance of calculating sample sizes scientifically cannot be overstated. Any attempt to test some hypothesis without it comes down to an ethical issue of wasting the time of participants, researchers and resources3. Although the above analogy is set in the medical context of a clinical trial, the arguments may apply to any research project that involves statistical analysis4.