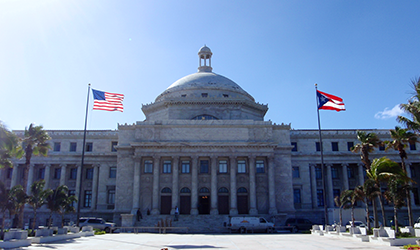 Puerto Rico's senators have approved a plan to dismantle the island's independent Institute of Statistics (PRIS). The plan will see the institute become part of the government's Department of Economic Development, which would then outsource statistical work to the private sector.

Significance first reported on the plan in our February 2018 issue. The story also leads our April 2018 issue, which is out this week.

The article from our print edition is reproduced below. As the magazine went to press, the PRIS reorganisation plan received approval from the Puerto Rico House of Representatives. Now, with the Senate in support, the plan is clear to proceed once enabling legislation is passed. This legislation will dismantle the laws that established PRIS a decade ago as an independently-controlled, government-funded entity.

Original story: A court has ordered the reinstatement of four board directors of the Puerto Rico Institute of Statistics (PRIS), who were removed by the island’s governor, Ricardo Rosselló, last summer. According to local media reports, a Superior Court judge ruled that the dismissals were “null and illegal” (bit.ly/2Aor5Z2).

The board members, all statistical experts, were removed and replaced by Governor Rosselló in an attempt to forge closer ties between PRIS and the Puerto Rico Planning Board, a body appointed by the governor to oversee economic planning for the island. Rosselló installed the Planning Board’s president as chair of PRIS. However – as detailed in our February 2018 issue – these moves were viewed by PRIS executive director Mario Marazzi as a threat to the independence of the institute, which was established “with the greatest amount of autonomy and independence from the government of Puerto Rico as was allowable under law”.

Marazzi welcomed the judge’s ruling in early March as lending further support to the institute’s independent status. But PRIS’s very existence remains at risk from a proposed reorganisation plan developed by the governor’s office.

The plan was first made public in January and was opposed in many quarters, both within Puerto Rico and outside, especially in the United States (the island is an unincorporated US territory). Opponents were alarmed that Rosselló was seeking to first consolidate all government statistical functions within PRIS, then make PRIS part of the Department of Economic Development, and later outsource the institute’s work to the private sector.

A petition organised by the American Statistical Association has attracted almost 3000 signatures at the time of writing (bit.ly/2t48x9z), while 15 members of the US Congress wrote to “express concern” at the proposals (bit.ly/2tkEcaj).

Rosselló has argued that the reorganisation is designed to achieve the very thing the plan’s critics say they want: quality, independent statistics. He told Science (bit.ly/2tm4gBS): “It’s been one of the main areas of criticism [of Puerto Rico], that we don’t have verifiable and good statistics. Let’s just fix it by consolidating all of these data-driven entities into one, and then let’s take it completely out of local government for it to be managed.”

But Natalie Jaresko, executive director of the Financial Oversight and Management Board for Puerto Rico – established in 2016 to help tackle the island’s debt crisis – urged that PRIS be retained and strengthened as a standalone and independent agency. “An independent and better funded PRIS will greatly assist Puerto Rico’s goal of producing consistent, credible, and current statistical data,” she said (bit.ly/2tsCcgr).

The governor’s plan was withdrawn in mid-February so that amendments could be made to parts of it. But the revised version – submitted to the legislature on 1 March – contained no substantive changes to the PRIS proposals. As Significance went to press, the plan received approval from the PR House of Representatives.