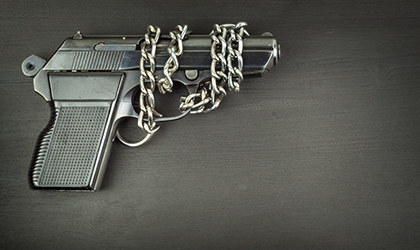 Analysis of public opinion surveys in the US suggests that increased proximity to mass shootings is associated with heightened support for stricter gun control. The research, by political scientists Benjamin Newman and Todd Hartman, was published online the day after a gunman shot and killed 58 people, wounding 546 others, at a Las Vegas music festival.

Using the 2010 Cooperative Congressional Election Study (CCES), a survey of 55 400 people, Newman and Hartman looked at the distance in miles between a respondent’s zip code of residence and the location of the nearest mass shooting event in which three or more people were injured or killed.

By comparing those closest to a mass shooting and those living furthest away, they found a 0.07 difference (or 20% increase) in the predicted probability of supporting stricter gun laws. The effect was replicated when analysing data from the 2010-2012 CCES re-contact panel, and the 2010 Pew Political Independents Survey.

Hartman, a statistical ambassador for the Royal Statistical Society, explains the results in more detail in the following Q&A:

Your paper states that “increased proximity to a mass shooting is associated with heightened public support for stricter gun control”. How big an effect are we talking about?

Todd Hartman: The short answer is that it depends on several different factors. Firstly, it varies as a function of the data we examined. In a large cross-sectional dataset (the 2010 Cooperative Congressional Election Study), the effect of living near a mass public shooting corresponds to a 0.07 difference (about a 20 percent increase) in the predicted probability of supporting stricter gun laws when moving from the minimum to maximum distance and controlling for a wide range of individual and contextual factors. In a subset of this data (2010-2012 CCES panel), where we can also control for prior gun policy preferences and look at only very recent events (16 mass shootings within a two-year window), we find a similar marginal effect of 0.06. And in the 2010 Pew Political Independents Survey, the difference in predicted probabilities is more pronounced at 0.14.

Secondly, the estimated size appears to be larger (1) for respondents who live near multiple mass shootings, (2) for shootings with higher numbers of victims, and (3) for more recent events. For mass shootings with more than 20 victims, for instance, the difference in probabilities more than doubles in both the 2010 CCES (from 0.07 to 0.15) and the 2010 Pew data (from 0.14 to 0.36). Likewise, living near multiple mass shootings increases the estimated effect (in the 2010 Pew data) from 0.14 for one shooting, 0.35 for two shootings, and 0.43 for three shootings.

In short, the effect of living near a mass shooting is associated with an increase in support for gun restrictions, but the size of this effect depends on a number of different factors.

How close does one need to be to a mass shooting for it to have any effect on attitudes towards gun control?

TH: Most Americans in our data actually live relatively close to one of the 210 recorded mass public shootings in our data; the median distance in the CCES data is just under 40 miles, and in the Pew data it is just over 45 miles. In our analyses, we generally treat distance as a continuous measure, so there is no specific threshold for the effect.

In the context of the recent Las Vegas shooting, should we already start to see shifts in public attitudes?

TH: Aggregate public opinion data suggests that we should see a spike in support for gun restrictions immediately following a major mass shooting like the Las Vegas attack, and recent polling data supports this conclusion (e.g., see this CNN article and this Newsweek coverage; likewise, search terms relating to “gun control” follow similar patterns). However, these aggregate upticks tend to regress back to the mean level of support a after relatively short amount of time (usually within weeks).

Because the data we examined only provides a snapshot in time (2010 for the CCES and Pew; 2012 for the CCES panel data), we simply cannot determine how long it takes for those directly exposed to a mass shooting to shift their attitudes in response to a specific event. What we can say, though, is that the difference in policy preferences for those exposed to a mass shooting event seems to persist over time: we find a significant increase in support for gun restrictions among those exposed to mass shootings, even if that event occurred many years earlier. It is only after very long periods of time have passed since the nearest mass shooting (e.g., decades) that the effect on gun policy preferences appears to dissipate.

What are the limitations of your work?

TH: The major limitation is identifying clear causal links between exposure to a mass shooting and change in public opinion toward gun legislation. The closest we can come to identifying causality is with our panel data, which provides pre- and post-event policy preferences, but even then, there is a lot that could be happening that is out of our control.

Another limitation is that our gun policy measure is not particularly fine-grained. It simply asks respondents whether “laws covering the sale of firearms should be made more strict, less strict, or kept as they are”. Ideally, we would have survey items covering a range of different topics related to firearms and gun policy legislation, as well as questions covering how Americans want government to respond to mass shootings attacks. This is particularly important, given that we know that Americans’ attitudes toward gun policy preferences are actually very nuanced (e.g., see this recent report by the Pew Research Center; see also this discussion of polarization of gun control attitudes by FiveThirtyEight).

You describe your research as providing “strong empirical demonstration that Americans’ preferences over gun control are responsive to proximate instances of egregious gun violence”. But what about the more numerous, frequent instances of gun violence seen in parts of the US? Is there any research or evidence of this having an effect on public attitudes to gun control?

TH: This is a great point. Mass shootings are a relatively rare event compared to other types of gun violence (e.g., domestic violence, self-inflicted gunshots, etc.; see the Gun Violence Archive for more details). One reason that we focused our efforts studying the effect of mass shootings on public opinion is that we expect these types of events to be different from other acts of gun violence, which often occur by known individuals and in certain communities. Instead, mass public shootings are unique in that they are seemingly random acts of violence that occur in public places (e.g., a school, church, theatre, shopping centre, etc.) in which anyone can be a victim. The fact that anyone could be a potential victim of a mass public shooting means that it should be harder for people to dismiss gun violence as someone else’s problem.

What are the implications of your work, particularly for policy in this area?

TH: The results from our study demonstrate that people living near these tragedies prefer stricter regulations on firearms. This finding is in stark contrast to how major lobbying firms like the National Rifle Association and conservative members of Congress portray public opinion. They often say that these events mean that we should have more – not less – guns to protect our communities (see, for instance, Wayne LaPierre’s statement following Sandy Hook: “the only thing that stops a bad guy with a gun is a good guy with a gun”).

Ultimately, we find that Americans most affected by these events want some form of restrictions on firearms following a mass shooting. That being said, we recognize that this issue is very complex, and groups on either side of the debate are very passionate about it. We hope that our work encourages further research and a move toward evidence-based policymaking.

A note on the data

The data come from two sources: The Cooperative Congressional Election Study (CCES), which is a large, nationally representative survey of political attitudes (N = 55 400), and the Pew Independents Survey from the Pew Charitable Trust (N = 3509). We selected these datasets because they included a measure of respondents’ gun policy preferences and geocodes (county FIPS and zip codes), which enabled us to locate all respondents spatially.

The CCES is supported by a consortium of more than 40 universities and produces a large national survey of the American electorate (Common Content), as well as separate 1000-person studies focused on particular research questions of interest to individual teams in the consortium (Team Content). We used the Common Content from the CCES.

The survey by the Pew Research Center for the People & the Press was conducted among adults 18 years of age or older living in the continental United States (2351 respondents were interviewed on a landline telephone, and 1158 were interviewed on a cell phone, including 508 who had no landline telephone). Pew is an independent research group that studies attitudes toward the press, politics, and public policy issues, and because they act in the public interest, their survey data are made available free of charge.