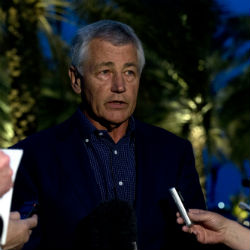 A recent New York Times article stated that U.S. officials believe the Syrian government has used chemical weapons against rebels in that country. This conclusion is based on the “testing of soil samples and blood drawn from people who had been wounded”. The agent found, according to U.S. officials, is sarin gas. This is the same agent that was used in a deadly Tokyo subway attack back in 1995.

There’s also been a debate here in the U.S. regarding our public benefit program for retirees, Social Security. The Huffington Post recently reported that Obama has offered a budget deal to Republicans that would reduce benefits by nearly $1000 a year for the average 85 year old. The reason there might be cuts in benefits is that Obama has proposed that we measure inflation differently.

Inflation is defined as an increase in the general price level and fall in the value of money. The U.S currently uses the Consumer Price Index (CPI) to measure inflation, the same index that is also used to increase Social Security benefits so their value is not eroded by price increases.

The problem with the CPI is that many economists have argued that it overstates inflation and, therefore, results in increases in Social Security benefits that are too high. The CPI doesn’t account for the fact, at least as economists see it, that people substitute cheaper goods for those that have undergone price increases. And this substitution means that price increases don’t harm people as much as we might think. An alternative measure of inflation is called the Chained CPI.

The Chained CPI takes the substitution effect into account and results in measured inflation levels lower than ones obtained using the CPI. It would also result in Social Security benefit increases lower than those we see now. This is the basis for the claim that Obama is proposing a benefit cut.

Something many critics of Obama would point out is that the Chained CPI may understate inflation for senior citizens. Seniors in the U.S., even with government provided health benefits, pay a lot in ’out of pocket’ health care costs. This results in such costs typically being a bigger proportion of their budgets than those costs are for younger people’s budgets.

The Chained CPI doesn’t account for this. So moving to the Chained CPI to adjust Social Security benefits for inflation could be very financially painful for seniors.

The possible use of sarin gas in Syria and a proposal to use the Chained CPI to adjust Social Security benefits for inflation seem, on the surface, to have little in common. But on closer inspection they raise the same issue, one that’s a perennial concern of statisticians and quantitative social scientists: measurement.

Measurement is typically defined as the assignment of numbers to objects to represent some trait of those objects. You would have to be a chemist to know how to assess the details of soil and blood samples for sarin, but it would be very surprising if the result of that assessment were anything other than a number. In fact, I suspect it would be a number representing the concentration of sarin - a trait of an object, in this case a soil or blood sample. Both the CPI and Chained CPI are essentially sets of complicated rules for assigning a number to the economy where the trait of interest is the degree to which prices are rising.

To a statistician or statistically minded social scientist these two news stories raise questions about the validity of measurement. A measure is considered valid if it actually measures what it purports to measure. The rules for assigning a number to represent the amount of sarin in soil or one’s blood would be valid if these rules allowed one to ascertain the actual amount of sarin in these samples. When statisticians talk about actual amounts of stuff, though, they don’t really mean actual amounts. This is because they assume there will be some measurement error in any attempt to measure anything. But for a measure to be valid this error must be random as opposed to systematic, such as an incorrectly calibrated measuring instrument.

The upshot of all this is that the seemingly arcane discipline of statistics finds itself smack in the middle of two very grave political issues. Whether U.S. seniors will have enough to eat or U.S. bombs will start falling in Syria may depend on someone having gotten the measurements right.