The Pope vote: left to chance? 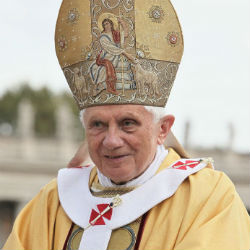 115 Roman Catholic cardinals have been having an almighty lock-in to decide who will be the next Pope. With a two-thirds (rounded up to 77) majority required to get to wear the fanciest of hats (pictured left), some suspect they could be there some time, but what would happen if everyone voted at random?

To answer this, we first have to decide how many options each cardinal has to pick from. Strictly speaking, they have 114 choices (you can't vote for yourself, apparently), but in reality there are only a handful of papabili. A quick look at the betting markets suggest that there are three primary contenders: Angelo Scola, Peter Turkson and Odilo Scherer all have odds of around four to one. Canadian Cardinal (one of the less successful superhero franchises) Marc Ouellet is next at eight to one, while the remaining candidates can only really be described as long shots so hopefully can be safely ignored (famous last words).

Let's start simple and assume there are only two options. If every cardinal tosses a coin to decide between, say, Scola and Turkson (one of the less successful 70s detective dramas) then how long could they expect to be admiring Michelangelo's handiwork? In other words, we want to know the chances of tossing a coin 115 times and getting either at least 77 heads or at least 77 tails (we don't care which of them wins, we just want to go home). Conveniently, the chances of the former are the same as the chances of the latter, and so we only need to calculate one of them and then double it. This is a fairly standard problem so I'll spare the details and just tell you that the odds of seeing 77 or more heads from 115 tosses is a pretty minuscule 1 in 5,700, which gives the Coin-tossing Cardinals of the Conclave (one of the less successful prog rock bands) a 1 in 2,850 chance of getting a Pope. With four conclaves a day that works out to, on average, nearly two years of voting before somebody is elected. I hope they packed a change of cassock.

If they have any more candidates to choose from, meanwhile, things get predictably worse. With third-favourite Scherer added to the pool of potential Popes they would be looking at 1.2 billion years in the Sistine Chapel, and if Ouellet got into the mix I'd have to resort to this Wikipedia page.

After Benedict's resignation, some quarters picked up on a prophecy which alleges that the next Pope's pontificate will usher in the beginning of the Apocalypse. If those 115 cardinals are picking at random, we'll be lucky to get that far.