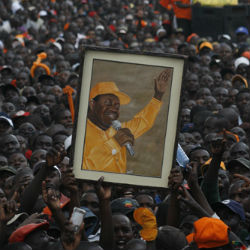 Kenya has been having elections. The results were announced on Saturday.  Uhuru Kenyatta, Kenya's richest man,  was declared winner with 50.07% of the vote.  The runner-up, Raila Odinga, alleged massive fraud and said he would challenge the results of the "tainted election" in the Supreme Court.
Kenya had elections 5 years ago too, in 2007/8. After those elections people started killing each other. Somewhere between 800 and 1500 died - note the wide margin of error, typical in trying to count casualties in civil conflicts – see here for how to try to count war dead. It was tribal violence, mainly between the Kikuyu, who reckoned their man had won, and the Kalenjin, who reckoned that their man had won. Homes and villages were burned if they happened to be lived in by people of the wrong ethnic group in the wrong area. Whole communities uprooted themselves and fled for their lives. Somewhere between 180,000 and a quarter of a million people were displaced – that is, ran away in terror.
The current elections have been just as bitterly fought. Support for the two main Presidential candidates is split along much the same tribal ethnic lines. The vote result was no foregone conclusion, being generally reckoned too close to call. And people have died: 19 in Mombasa, including four policemen hacked to death by machete. Nor has it been a good omen that Uhuru Kenyatta, son of the first president of independent Kenya Jomo Kenyatta, has charges of crimes against humanity outstanding against him at the Hague, stemming from his role in the last round of violence.
Africa. Basket-case continent of the world.
But. Slight but. This time round - fingers crossed, touch wood, keep hoping - the mass violence has not (yet) happened. News reports have told of millions waiting patiently to vote; and the constitution, it seems, has been amended in an effort to avoid the sort of violence that came last time round. How Mr Odinga now handles his supporters will determine whether his dispute stays in the courts or spills out on the streets, says the BBC.
And another statistic, after those about the 800-1500 deaths: which continent’s economy has outperformed the global average over the past decade, in terms of percentage improvement? Yes – Africa’s. Its collective GDP, at $1.6 trillion in 2008, is now roughly equal to Brazil’s or Russia’s, and the continent is among the world’s most rapidly growing economic regions, says McKinsey Quarterly.  The 2007/8 crisis saw Kenya’s economy plummet. This time round, the Nairobi stock exchange is rallying and the Kenyan shilling is up against other currencies; the Nairobi All Share index has advanced 13 percent this year.
Meaning what? In the most recent issue of Significance, Havard Hegre of the Peace Research Institute, Oslo, predicts, by statistics analysis, that conflicts in the world will decrease. In 1988 10% of countries had major internal conflicts, of the 2007 Kenyan-election type or worse. In 2011 it was only 4%. By 2050 he expects it to be just 1%. His article is available on open access here. His analysis is of all major and minor internal conflicts in the world since 1946; and he finds correlations, factors that accompany decreasing likelihoods of civil war.
One is economic development: the more citizens are part of a developed economy, the less likely they are to start massacring their neighbours. (One reason is not too hard to spot: people with good jobs and mortgages and so on have far more to loose if their society collapses around them.) Another factor is education: the greater the proportion of citizens with secondary education, the less likely that country is to collapse into civil strife. Education, it seems, makes for toleration. Another is health, gauged by infant mortality. Factors that go with increasing strife are the proportion of young men in the population, and ethnic inequalities within it.
Correlation is not causation; but there may be causal links. We put one of them in the brackets above.
How are these factors changing in Kenya? Here is the graph that Hegre gives for East and Central Africa. All the variables that can change seem to be moving in the right direction – albeit slowly, and from a low base. Hegre is not predicting sudden peace for East Africa; but he is predicting a gradual decline in conflict, starting around 25 years from now – see his second graph (where CI means confidence interval). For other regions of the world his predictions are more positive and kick in sooner. 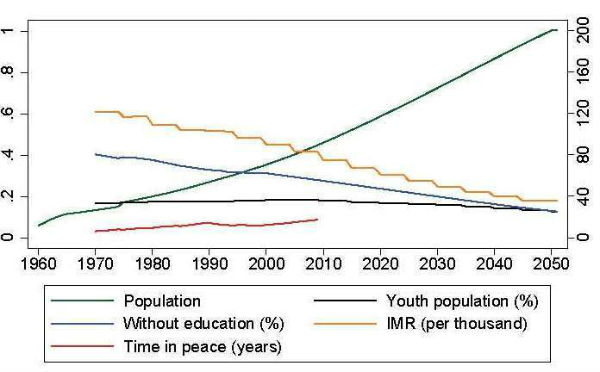 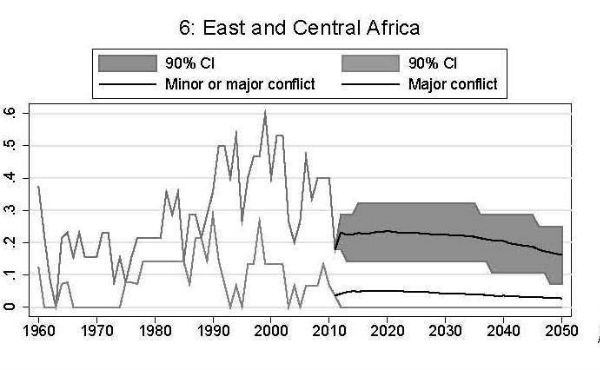 One case, one country, does not make a statistic. The most it can be is an illustrative example – and plenty of illustrative examples point in the other direction. (Syria for a start). Africa has plenty of problems, and a future far from easy and probably far from peaceful. But still, economic development IS a disincentive to civil violence – and economic development is happening. Education DOES go hand in hand with less willingness to kill your neighours – and the proportion of the educated is rising. Better health care DOES go with fewer armed civil conflicts – and Africa’s infant mortality is falling. Statistical reasons to live in hope, maybe?
back to top