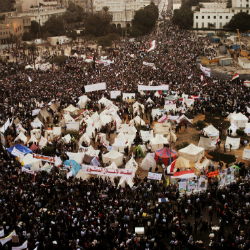 And some claims go even higher: the BBC reports claims that 17 million - and even 30 million people – have been involved in the street protests, and rightly points out the absurdity of such estimates. The total population of Egypt is 80 million; and one-fifth of those are children under ten. The entire population of Egypt is about 80 million; which means that there are 64 million Egyptians who are older than ten. It is extremely unlikely - or, not to mince words, impossible to believe - that almost half the adult population took to the streets.

We could say that these figures are estimates – but they are more than that: they are biased estimates. It is in the interests of both sides – pro-Morsi and Muslim Brotherhood, and anti-Morsi and Brotherhood – to exaggerate the numbers who are out on their side. It is far from clear where the estimates have come from, but the overexaggeration alone reveals they are far from impartial.

But it is hard even for impartial observers to estimate accurately numbers of demonstrators. Street protests are by their nature chaotic, fluid and always in a state of flux. Aerial or satellite photography can help; but the photos can rarely capture the whole area of the protests, whose boundaries are in any case undefined and changing. How do you distinguish a protester from a shopper or from someone who is just trying to get to work?

One estimation technique is to divide the area into grid-squares, count the number of people in one square, and multiply up; but the density of protesters will vary from place to place, and over time as well. A rough guide, provided by Professor Yip of Hong Kong University, is that in a loose crowd the density is about one person per square metre, a solid crowd has about double that, and a very dense crowd has about 4 people per square metre. On that basis, Tahrir square, the centrepiece of the protests that overthrew President Mubarak during the Arab Spring, would take about half a million people to completely fill it.

For a demonstration that is on the move – a protest march – you can count the people passing one particular spot – but some join the route at different places, or drop out early, or pass the same place. Statistical techniques can be applied to such data to give more accurate estimates; but as Professor Yip wrote in Significance, crowd estimates should always be viewed with scepticism. You can see his article nicely paraphrased, on the BBC website linked to above. For the full version see it here.