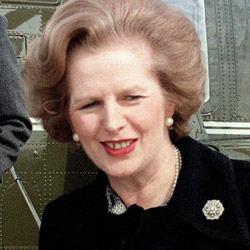 The death of Lady Thatcher was reported today. Better known as Margaret Thatcher, she was Prime Minister of Great Britain from 1979 to 1990. A controversial figure, her life and career will doubtless be reported at greater length in many other outlets. But on this site we should record one important fact about her: She had a degree in Chemistry, from Oxford. She was Britain’s first woman Prime Minister. She was also our first, and so far only, Prime Minister whose initial training was in science.

And two of the most important decisions she made as Prime Minister were admirably based on scientific and statistical evidence, even though they conflicted with her deepest political convictions. For those two decisions she deserved the greatest credit and thanks, no matter what one’s political outlook.

The first of those decisions was when the AIDS epidemic was making its first appearance in the early 1980s. No-one knew much about it. No-one knew whether it would mainly afflict homosexuals or whether it would be as devastating to the heterosexual community as well. Many, believing the former, described it as a disease of the immoral, even as God’s punishment upon gays.

It was Margaret Thatcher’s government, with Norman Fowler as Health Secretary but undoubtedly acting on her say-so, which faced the issue head on and refused to take a ‘moral’ tone on public information and prevention work. AIDS clearly spread through unprotected sex, heterosexual as well as homosexual; and using condoms was seen as perhaps the only way to check or slow its spread. People had to be told of this.

Margaret Thatcher had a deep distaste for public – let alone governmental – interference in private matters; and for a government – let alone her government – to instruct people how they should behave in bed must have gone against every instinct, political and prudish, that she had. Nevertheless, she listened to the scientists and on the basis of their evidence she realised that the use of condoms had to be promoted. Advertisements were placed in the press; leaflets posted through every letter-box; she insisted that a public information film ‘AIDS – don’t die of ignorance’ be shown in cinemas, on the BBC and on commercial television; and that it be shown as widely as possible.

The film itself was in some ways laughable. Certainly the visuals were entirely metaphor – of exploding volcanoes, and couples separated by a chain-link fence rather than anything sexual – and the word ‘condom’ was not used; but the soundtrack was explicit enough:

‘There is now a danger which is a threat to us all. It is a deadly disease and there is no known cure. The virus can be passed during sexual intercourse with an infected person. ….Anyone can get it, man or woman. It is spreading. So protect yourself.’ It can be seen here.

Warning the public about the new danger from unprotected sex was controversial, but was clearly on public health grounds the right thing to do; and Margaret Thatcher did it.

The second decision was, if anything, even more far-reaching. She was the first leader of any country to take climate change seriously. Sir Crispin Tickell was instrumental in persuading her of its reality. He was a top diplomat (British Ambassador to the United Nations among other things) and later, President of the Royal Geographical Society. She always gave him the credit for persuading her to make a speech on global climate change to the Royal Society in September 1988; it was widely reported and was the first time the subject made an impact outside scientific circles.

The following year she gave another speech, this time to the United Nations. “We are seeing a vast increase in the amount of carbon dioxide reaching the atmosphere” she said. “The result is that change in future is likely to be more fundamental and more widespread than anything we have known hitherto.”

Even today many politicians will not go so far, in speeches or in actions. She deeply distrusted international organisations, and was opposed almost everywhere to giving them more power. Yet she called for a global treaty on climate change.

The results have not so far been wonderful. But those results are all that we have. Again, it had been the strength of the science and of the statistics that persuaded her.

Margaret Thatcher had a background in science; she took scientific evidence seriously, and she acted on it. We would perhaps be better governed if more political leaders had the same background knowledge and did the same.